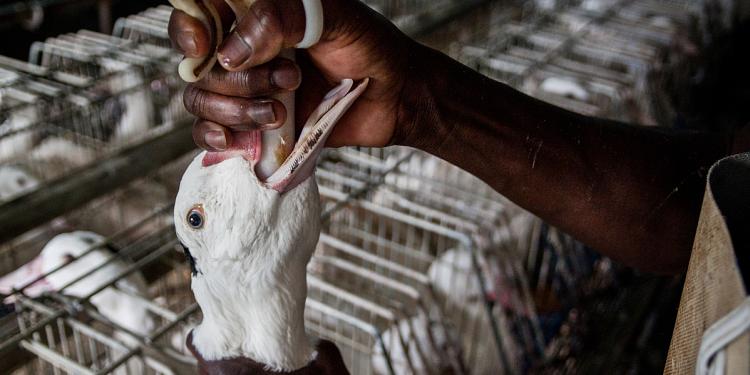 European citizens thank the European Parliament for demanding an end to the cruel and unnecessary force-feeding of ducks and geese for the production of foie gras.

On June 10 the European Parliament (EP) called on the European Commission (EC) to “put forward proposals to ban the cruel and unnecessary force-feeding of ducks and geese for the production of foie gras”.

Force-feeding, or gavage, is the practice of forcing a funnel into a bird’s throat and pushing great quantities of food into the stomach to induce an abnormal growth and accumulation of fat in the liver. Geese and ducks undergo this procedure 2-3 times a day and their liver then can grow to more than 10 times its normal size.

This barbaric practice has already been rejected around the world, including in most European Member States. Only France, Hungary, Bulgaria, Spain and Belgium continue to force-feed birds for the production of foie gras (1).

Not a single independent scientific study has ever justified the use of force-feeding in foie gras production, and already in 1998 the Scientific Committee on Animal Health and Animal Welfare (SCAHAW) of the EC  affirmed that “force-feeding, as currently practised, is detrimental to the welfare of the birds” (2). Since then, no further studies on this topic have been conducted on behalf of the EC, and cruel force-feeding techniques continue to be used, having not evolved substantially since the study was made in 1998 (3).

The absurdity is that banning force-feeding would not mean the end of foie gras, as some producers state. In fact, foie gras production could carry on unscathed, by adopting more humane methods, with a simple and costless act from the EC.

In order to label a product as foie gras, the animal's liver has to reach a minimum weight impossible to reach without force-feeding. This requirement was established only in 1991 and therefore is not “traditional”, since previous production protocols didn’t associate foie gras quality to any minimum liver weight.

The EC could easily remove the arbitrary minimum weight requirement from the Marketing Standards for Poultrymeat Regulation, (EC) No 543/2008, as asked on several occasions by MEPs through parliamentary questions, and strongly backed by European Citizens. Further delays by the EC in proposing this simple, cost-free measure would not be justifiable in the eyes of those who believe that the EU should support progress on animal welfare, rather than ignoring the demands of its citizens and elected representatives in favour of the dreadful status quo.

Consumers are increasingly aware of the cruelty of force-feeding, a 2018 survey conducted in France by Eurogroup for Animals’ member L214 demonstrated that 60% of respondents were in favour of a ban on force-feeding. Moreover, some countries like the United Kingdom on top of banning the practice are considering an import ban on all products derived from force-feeding.

The foie gras industry needs to stop this cruel practice once and for all. It’s already banned in most countries and condemned by all independent scientific studies. We invite the EC to endorse the EP’s request and we indicate the deletion of the reference to the minimum weight of livers as a way forward to preserve foie gras production while ending the barbaric practice of force-feeding.