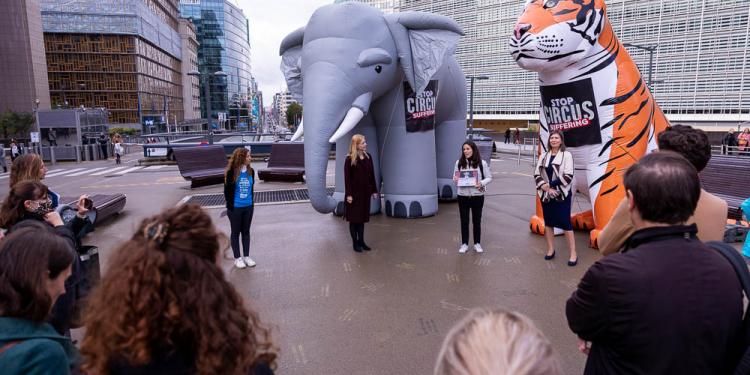 News
Thanks to 1 million citizens demanding action for wild animals in circuses, today the European Parliament (EP) discussed the topic in plenary for the very first time. The European Commission’s position is not committal and in sharp opposition to the EP’s demand for action. However, the debate showed a groundswell of political support to end the suffering of wild animals in entertainment, and a recognition for the public and civil society demands.

Back in October Eurogroup for Animals and its members, along with InfoCircos, handed over the 1 million signatures collected through the Stop Circus Suffering campaign to representatives of the European Parliament, Eleonora Evi MEP and Anja Hazekamp MEP.

Today an “EU ban on the use of wild animals in circuses” made it to the Plenary agenda with an oral question: “Does the Commission intend to introduce a ban on the use of wild circus animals in the EU in order to ensure that the exposure to the risks of the illegal wildlife trade and risks to public health and security are uniformly mitigated across the Member States and to assist with the enforcement of national restrictions for the majority of Member States that already apply them?” and was discussed after a statement from the European Commission (EC).

The EC’s representative clearly stated that it’s an ethical issue for which only Member States (MSs) have competency. Even if the welfare of wild animals used in circuses raises concern, it’s only on the MSs to act, hence he invited them to follow the ones which have already implemented bans.

MEPs from across the political spectrum and from a variety of MSs countered this statement and urged the EC not to hide behind a lack of competency. They stressed the need to listen to citizens and base the decision on science: in circuses wild animals are not only imprisoned and forced to behave unnaturally, they also pose a threat when it comes to the risk of disease transmission, to the accidents which impact trainers and public, and the use of endangered species could fuel their illegal trade.

New circus performances without animals could keep the tradition alive without inflicting unnecessary suffering to animals and not losing anything in terms of creativity and performance.

We welcome the strong crossparty support from the EP and the call for the Commission to not hide behind a lack of competence as several grounds could be used to enact a ban. We will not stop our efforts until the EC acts to safeguard all the wild animals currently trapped for “entertainment”, their welfare is a European responsibility and we’re going to make their voices heard
Reineke Hameleers, CEO Eurogroup for Animals

Yesterday, AAP Animal Advocacy and Protection, a member organisation of Eurogroup for Animals, signed a contract with the Portuguese authorities to rescue almost all of the remaining wild animals from Portuguese circuses. Portugal’s national ban on the use of wild animals in circuses, enacted in 2018, will enter into full force in 2024. To aid the enforcement, AAP offered suitable rescue solutions for all the remaining wild circus animals, to which most of the circuses agreed.

The rescue community is always willing to step up and offer solutions to enforcement authorities in implementing these important bans. But we must not forget that this cruel and dangerous use of wild animals in circuses is inherently a cross-border issue, as is the rescue of these animals. We are being asked to coordinate rescues across the EU, because there are no mechanisms in place for this. These transboundary issues are still left solely to Member States to deal with nationally, while they so clearly require an EU solution. We really need the EU to step up and play its coordinating and harmonizing role here
David van Gennep, CEO, AAP.

Text of the Oral Question