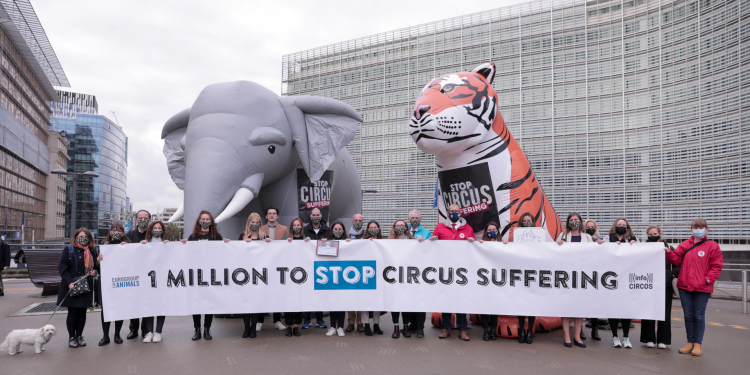 News
During a ceremony in front of the Berlaymont’s building, Eurogroup for Animals and its members, along with InfoCircos, celebrated the one million citizens demanding an end to circus suffering. The signatures were handed over to representatives of the European Parliament, Eleonora Evi MEP and Anja Hazekamp MEP, who will now submit them to the European Commission.

The petition had been initially started in 2018 by InfoCircos and was later integrated in the Eurogroup for Animals Stop Circus Suffering campaign, launched on 3 March 2021.

81 organisations throughout the EU mobilised the public and collected over one million signatures, confirming what opinion polls and scientific opinions have been pointing out for a while: wild animals in circuses are destined to a life of physical abuse and mental torture and there’s no more room for this cruel entertainment.

Several Member States still don’t have any restrictions in place, or only partial ones, on the use of wild animals in circuses. Moreover, circuses are travelling entertainment services moving around Europe, and performing wild animals are transported across Member States, where circuses pose severe public safety and animal health and welfare risks, as explained in our latest report Wild Animals in EU Circuses : Problems, Risks and Solutions.

One million citizens have spoken, now we need to turn this public mobilisation into political engagement. Only an EU wide ban can guarantee the end of this outdated entertainment and provide a coherent and effective solution to the physical and emotional suffering of wild animals in circuses. That’s why we call for an EU wide ban, since bans at the national level won’t prevent these movements with all the associated health and security risks and distresses for the animals
Reineke Hameleers, CEO of Eurogroup for Animals

The road crash of a circus trailer on a Spanish highway in 2018, which left one elephant dead and four injured, wandering haphazardly on the road, was the last straw and the beginning of this petition. The public outrage that followed this incident made it clear that European citizens have had enough of wild animals being abused in circuses. Today we celebrate the one million people that have signed our petition, who want to help all the wild animals that still live miserable lives in circuses and who die knowing nothing but a life of deprivation and suffering. It is time for the European Commission to listen to EU citizens and put an end to the use of wild animals in circuses.
Marta Merchan, InfoCircos coalition

There’s a romantic notion of circuses as being magical places for children and I fully share this view as long as wild animals aren’t part of the attractions. Wild animals in circuses greatly suffer from physical and social deprivations and their training is frequently based on punishment. Animals who are forced to live in unnatural conditions can react in ways which pose a risk to their tamers. As an elected representative, my mission is to make sure this extraordinary public mobilisation of EU citizens against wild animals in circuses is translated into political achievement. The European Commission has the responsibility to listen to the citizens and put an end to this outdated and unacceptable practice.
Eleonora Evi MEP (Greens/EFA)

Public support for the use of wild animals for entertainment is long gone, and the one million signatures collected with the EU Stop Circus Suffering campaign is yet another proof. Together with other MEPs, I will do everything possible in order to achieve an EU wide ban. It’s time to show future generations that animals deserve our respect and protection and should not suffer in circuses.
Anja Hazekamp MEP (GUE/NGL)