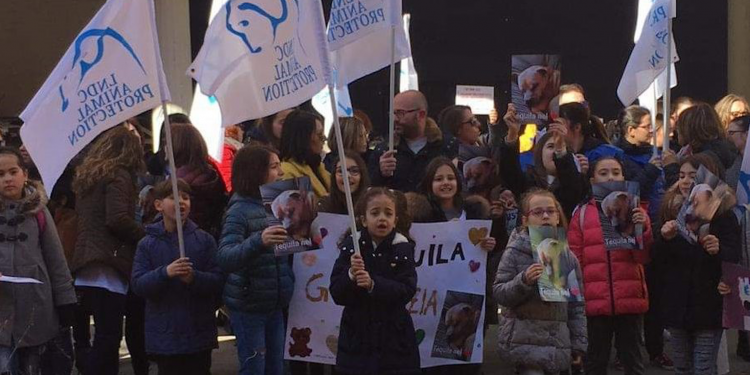 News
A meeting to ask for justice for the sweet pit bull killed by a Municipal Police officer.

LNDC activists stressed the need to give adequate training to the agents responsible for carrying out interventions of this type. Rosati: happy for the participation of many children who have known and loved Tequila. The uniform cannot and must not constitute a license to kill.

Warm participation of many animal-loving people in the demonstration organized by the LNDC Section of Pescara to remember Tequila and ask for justice for his killing which appears to have happened without any real reason. The event began in the town square of Montesilvano, where the activists were joined by the Councilor for Animal Welfare of the Adriatic town who listened to their grievances and requests. In particular, the commissioner Deborah Comardi agreed on the need to train municipal police officers to deal with interventions concerning animals with full knowledge of the facts and said that she will bring this suggestion to the rest of the city council.

In addition to the Tequila family, there was a group of boys and girls who knew the dog killed well and wanted to testify how docile and meek it was. The demonstrators then moved to the municipal police headquarters to make their voices heard by those directly responsible for the death of the puppy. From the command, however, no one wanted to confront Tequila's family members or the activists who intervened in their support, entrenching themselves behind a "forced" silence due to the ongoing investigations into the incident.