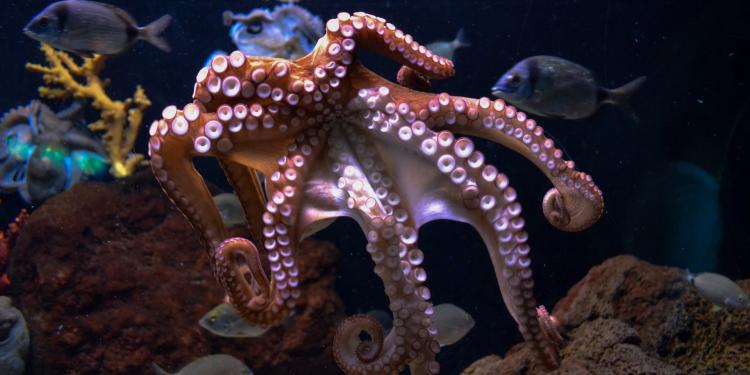 A new report released by Eurogroup for Animals' member Compassion in World Farming on World Octopus Day reveals eight reasons why octopus factory farming is cruel, damaging to the planet, and must be stopped.

Compassion’s report - ‘Octopus Factory Farming – A Recipe for Disaster’ - reveals how the octopus would suffer greatly due to its solitary and inquisitive nature and exposes the lack of any approved humane slaughter method. In addition, there is currently no legislation to protect their welfare in farms and their carnivorous diet makes farming them unsustainable and damaging to the environment.

Marine Biologist Dr Elena Lara, Fish Research Manager at Compassion in World Farming and author of the report, explained: “The Netflix film, My Octopus Teacher, gave the world a moving glimpse into the lives of these unique, naturally solitary and fragile wild animals. People who watched it will be appalled to discover that there are plans to confine these fascinating, inquisitive, and sentient creatures in factory farms. Their lives would simply not be worth living.

“The word ‘octopus’ comes from the Greek ‘októpus’ meaning ‘eight foot’, so our report, launched today on World Octopus Day, reveals eight reasons why octopuses should not be factory farmed.  It details the immense suffering it would cause, the lack of a humane slaughter method and the absence of any legislation to protect their welfare. What’s more, feeding fishmeal to these carnivorous wild animals in farms is unsustainable and would be very damaging to the environment.

“That’s why, today, we have sent our report and written letters to the governments in Spain, Japan, Mexico and the US – where octopus farming is mainly being developed - urging them to prevent any further development of this practice.”

Wild-caught octopuses are consumed all over the world, and especially in several Mediterranean countries in Europe, as well as in Asia and Mexico. In the EU, Italy consumes the most octopus, at over 60,000 tonnes per year, but there has recently been high demand for octopus in other markets, such as the United States and Japan, even as wild octopus populations shrink.

As a result, there has been increasing pressure to develop a way to intensively farm octopuses, with Spain leading the way, conducting research into open-ocean net cages and tanks.