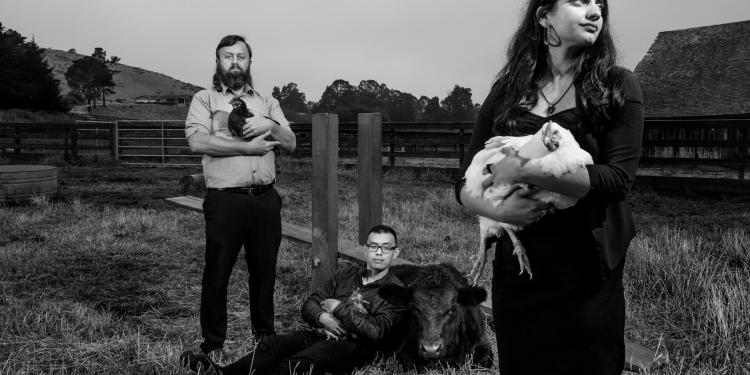 News
This animal liberation group actually wants to be put on trial. Their goal: force jurors to wear VR headsets and immerse them in the suffering of animals bound for slaughter.

Just before midnight somewhere in the western United States, a white pickup truck’s high beams light up a stretch of dark highway.

The driver slows as his three passengers peer through the cab’s front and rear windshields, looking for the headlights of any cars that might catch them in the act of trespassing.

“Let’s be prepared to jump.”

“You have your bag and walkies?”

As the truck speeds off, the three figures scramble quietly off the highway shoulder and into a terrain of scrub brush and jagged gullies. For the next 15 minutes, they walk down an unlit dirt road in near total darkness; even the waning moon’s sliver of light is hidden behind clouds. But their noses tell them they’re in the right place. They’re engulfed in a smell that intensifies as they walk: a blend of barnyard animal, excrement, and decaying flesh. The silence is interrupted only by the crunch of their feet on the sand and then, after a few minutes, sporadic, far-off guttural animal bellowing. They’re approaching their destination, a massive industrial pig farm.