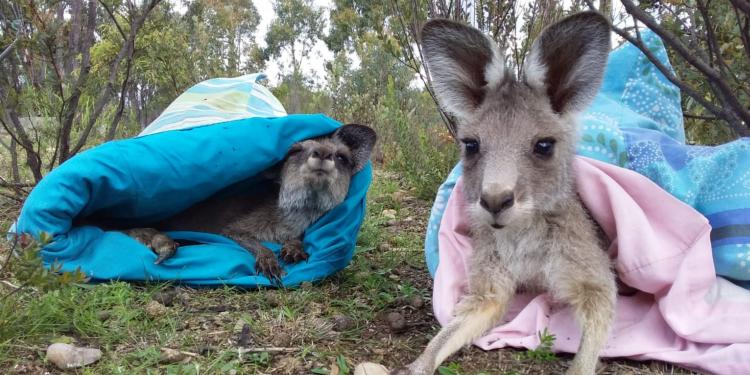 News
Dianne Smith, owner the Australian kangaroo shelter Kangaroo Alive, shares her heartbreaking testimony on how whole families of kangaroos are devastated every night across Australia, ripped apart by bullets, fear and sorrow.

From my property in the state of New South Wales I frequently hear the crack of rifles, and witness terrified kangaroos smashing against fences, the sickening thump of bullets hitting and bodies falling every night in outback Australia, and lost baby joeys calling their mothers after watching them being beaten to death or having their throats cut to 'bleed out' while hanging from the filthy truck of one of Australia's Commercial Kangaroo “Harvesters”.

Thousands of babies are either bludgeoned to death or left behind every night, frightened and alone, searching desperately for warmth and safety often amongst the steaming remains of a Kangaroo Industry butchering site.

The little ones who die in butchering sites are usually physically pristine, they've died of the freezing cold or probably more often they die from exposure. I've only ever seen one joey who had been killed by a commercial shooter in line with the ‘‘so called” Code of Practice, the baby still had the imprint of the shooter's boot on his head and upper body,"

I've watched little 2 year olds trying to care for and protect their younger brother or sister after every adult member of their family has been shot and taken by the shooter, The older sibling would be unlikely to survive without her Mother, the younger baby joey can barely walk having never left the safety of his mother's pouch. It's absolutely heartbreaking."

Diane and her partner, Greg Keightley, who are featured in the award winning film Kangaroo a Love Hate story  rescue orphaned victims of the 'commercial harvest' as often as they can, spending days and nights scouring fields and bushland in search of survivors after the Commercial shooters have been operating next to their home in rural NSW.

"Sometimes the little ones make it easy for us and call for help when they hear our footsteps, they make a coughing sound or click their tongues. They're usually hiding near the remains of their mother or still in the pouch of a mis-shot mum who has escaped the shooter. These little guys are so grateful for the warmth and safety that they often go straight to sleep as soon as we tuck them under our clothing. The comfort of our heartbeat and body warmth must be such a relief," explained Greg.

The older joeys are almost impossible to help. They already have a heightened sense of fear as they are aware of their vulnerability as new 'people' in the world and their witnessing of the horrors of the Kangaroo slaughter only serves to make them even more terrified.

Greg explains, "We're lucky to even see one of these guys, let alone catch them to take them to safety. The heartbreaking thing is, we can hear them calling for help for days and days until they stop. They starve to death, die  of thirst or exhaustion or they're eaten alive by Eagles or Foxes. Why?

The commercial kangaroo industry is subjecting this magnificent animal and their vulnerable young to abhorrent terror to make pet food, shoes and handbags.

Amidst all the fear and sadness there are a few stories of survival and hope.

"Ricky, Lego, Bliss, Tower, Batman, Fly, Robin, Mars, have I forgotten anyone?" As I line up the bottles and teats for one of the five kangaroo joey feeds I will be doing today.

That's the order they were rescued. I find it easier to remember their feed amounts if I do it that way.  River! I forgot River. He came to us between Robin and Mars. He's a special little fellow, beautiful independent spirit who takes himself off on adventures for days at a time then comes home, rolls into his oversized big boy bag, has a bottle and tucks himself in for a 6 hour super sleep. Love him!"

I realize its important that I share our story. How these orphans came into our care, "Lego's mum was shot by a Commercial Kangaroo shooter and just left in the field. What's terribly sad, is that the property where Lego's mum lived carries no stock.  There are no cows or sheep there, no crops or orchards or grape vines, just vast rolling (mostly native) grasslands and magnificent native bushland."

Greg adds, "the justification for eradicating kangaroos is that they supposedly compete with farmed animals for food and water or that they graze crops and thereby cut into the farmer's profit and yet, here we have a Commercial Kangaroo shooter coming back night after night, slaughtering a naturally occurring family of kangaroos which is existing peacefully within its natural habitat. It's a travesty.

Caring for these orphaned babys is now a full time job I need to help them, Even though Lego is a few months younger than Ricky, they have become best mates. They cuddle and groom each other then reach out their hands to invite their little brothers to join in for a group hug. They seem to be such affectionate beings.

"Ricky and Lego will be friends for life. They'll sleep together, play with, chase and race each other, they'll pursue the ladies together when they're older and they will be loyal and even protect each other when danger presents. Their friendship is no different to yours. Their affection and concern for each other is genuine and deep

So many times I have watched while a big kangaroo man lays down his life for his mates by standing next to an escape route while his friends run for their lives from a Commercial Kangaroo Shooter. Shot, hung from the shoooters vehicle then stabbed in the throat while writhing around on the hook while his friends stand behind me and watch. How must their poor hearts feel. Tragic."

"You know I've even seen old grandmother kangaroos stand in front kangaroo industry shooters' vehicles to stop them chasing and killing their family. Grandma knows she'll be shot, she's seen it happen time and time again, yet she values the lives of her family:  adult male sons, daughters, grandbabies more than her own. And yes, just about ever time, the little white nosed old lady is shot, her flesh worth about $5 to the harvester, if that, her dependent young left alive, alone, to suffer and die. That's little Robin's story actually...

Though this work Greg and I have been inspired to help create a not for profit “Kangaroos Alive”, which is dedicated to the ethical treatment of kangaroos. It has given Greg and me a platform to speak from. To tell our story, an eyewitness account of what happens with the commercial kangaroo industry.

I am very grateful to the support we have received from Europe, funds donated have enabled us to buy essential supplies.

Dianne has dedicated her life to rescuing the orphaned and injured victims of the commercial kangaroo industry. She and her partner Greg Keightley have turned their rural property into a kangaroo rehab facility, a kangaroo shelter. Please support the campaign to protect the kangaroos and to help Dianne and Greg’s work.