EFSA scientific opinions on the welfare of animals during transport 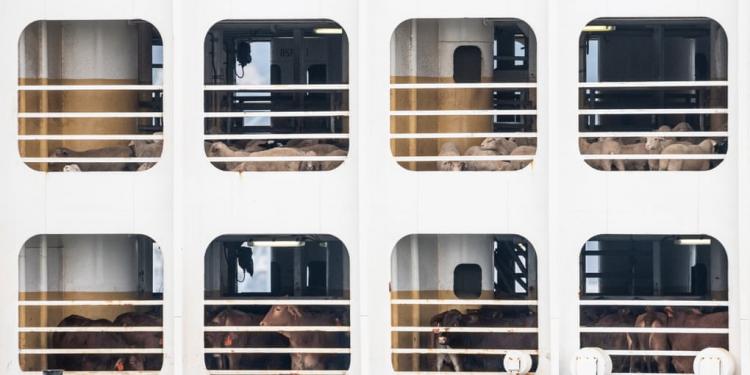 EFSA scientific opinions on the welfare of animals during transport

The European Food Safety Authority publishes its recommendations to improve animal welfare during transport. Eurogroup for Animals welcomes the new research but we would have hoped for stronger recommendations given that the evidence of animal suffering is there.

Although for the different species there is clear evidence that negative mental states such as pain, fear, fatigue, boredom, discomfort and stress are present from the beginning of the transport and only get worse as the duration of the journey increases, EFSA doesn’t recommend shorter journeys for the majority of the species, stating, for example that rabbits and domestic birds can be transported for up to 12 hours. Moreover, EFSA provides recommendations to mitigate the risk related to high stocking densities. In the majority of the species, these recommendations do not even allow animals to lie down comfortably during the journey.

EFSA concludes that sea transport adds even more hazards to animal welfare than other types of transport for all the species analysed. Nevertheless, the opinion doesn’t take any conclusion regarding this topic, even suggesting that more evidence is needed. During the past decades we witnessed continuous failures of sea live exports, which provided plenty of evidence. The European Commission (EC) should not need more evidence, nor tragedies, to support a ban on live exports.

On the specific case of unweaned calves, although there is clear evidence that there are higher risks for these animals, EFSA doesn’t recommend a ban, taking a weaker stance and recommending that they can be transported after 4 weeks of age.

Although we are disappointed that the EC has not gathered the latest scientific knowledge on the welfare of fish and other aquatic animals in these EFSA opinions, we are reassured by Commissioner Kyriakides recent written response to MEPs confirming that the EC will mandate EFSA to gather this knowledge in support of provisions to be introduced through delegated acts.

Finally, we welcome EFSA’s recommendation to transport fertilised eggs and support on-farm hatching in order to reduce the transport and handling stress of day-old chicks.

Although the EFSA opinions regarding the welfare of pigs, cattle, small ruminants and domestic birds during transport demonstrate the continued suffering of these animals, they lack stronger conclusions to protect their welfare. Animals experience several negative affective states, such as hunger, stress, pain and discomfort, from the very beginning of the journey. Their condition increases in severity with the journey duration. Over the years, practical experience, scientific evidence and experts’ opinions have demonstrated that there is no possible mitigation for the hazards that long journeys over rail, road or sea pose to animal welfare. There is an urgent need to reduce maximum journey times overall, and to introduce a ban on live exports and on the transport of certain types of animals such as unweaned calves. Ultimately, the solution is to replace live animal transport with a meat and carcasses trade
Reineke Hameleers, Eurogroup for Animals CEO

Eurogroup for Animals welcomes EFSA’s scientific opinion on the Welfare of equids during transport. The new research confirms that transport is a critical stressor with high implications for their welfare, and corroborates the need for stricter legislation on the transport of horses, donkeys and their hybrids.

EFSA’s recommendations align with Eurogroup for Animals’ proposals on the training requirements for transporters and handlers and confirm the need to develop protocols to assess the welfare of horses during transport. We also acknowledge and support EFSA’s suggestion to use technological tools and systems to ensure and monitor microclimatic and animals’ conditions.

Although we acknowledge EFSA’s recommendation to maintain journey duration to a minimum, we note with concern the absence of clear recommendations on species-specific maximum journey times. Evidence analysed by EFSA clearly demonstrates the need to set limits on journey times at 8 hours, including for equines destined for slaughter. With the abundance of research on the topic, we urge the European Commission not to further delay action.

We support the conclusions of EFSA on the transport conditions of equines destined for slaughter, highlighting that these animals are often transported over long journeys and in poor conditions, because they are considered of lower value and often suffer from health issues prior to their final journey. Along with EFSA, we also encourage further research on whether control posts really address animal welfare concerns during long journeys and support EFSA’s recommended period of minimum 12-hour rest for equines at a control post, including loading and unloading.

EFSA’s scientific opinion on the welfare of equidae during transport clearly demonstrates the need to set maximum journey times. The evidence is there, it is now time for the European Commission to act. The new research reminds us that transport conditions affect the welfare of all equines, calling for stricter rules for all these animals, regardless of their destination.
Reineke Hameleers, Eurogroup for Animals CEO