Each year up to 9,000 pigs die before leaving Denmark 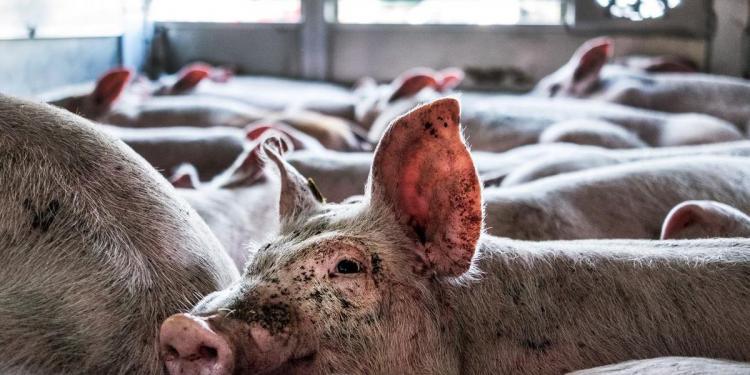 Each year up to 9,000 pigs die before leaving Denmark

The Animal Protection can now reveal that up to 9,000 pigs at gatherings each year die or are killed in connection with exports abroad.

Gatherings are a stop where pigs are reloaded before being sent out of the country. The figures come from the Danish Veterinary and Food Administration's Pig Relocation Database and testify according to the Protection of the Animals how incredibly harsh conditions they are exposed to when they are loaded onto trucks and transported around Europe.

“It screams to heaven that 8-9,000 Danish export pigs die each year, even before they leave the country, and I am very concerned about what it looks like for the many millions of pigs that the Danish pig industry sends live on trucks every year abroad, ”says Director of Animal Protection, Britta Riis.

Danish pig producers export over 14 million live pigs every year, making Denmark the EU's largest exporter of live piglets, but the total number of animals that die or must be killed before reaching their destination is unknown.

The Minister for the Environment and Food, Jakob Ellemann-Jensen, informed the Environment and Food Committee in November 2018 that the Danish Food and Veterinary Authority cannot determine how many pigs die in connection with transport to, unloading and staying in Danish assembly facilities. DR has subsequently presented the Animal Protection figures to the Danish Veterinary and Food Administration, which confirms the figures and, on the basis of the large difference in the number of dead animals and sanctions, recognizes that farmers and carriers should have been sanctioned in several cases. That causes the Animal Protection to sharply criticize the National Food Authority:

“It is simply not good enough that you have not consistently sanctioned cases where the rules are broken. Once again, it testifies that the Danish Veterinary and Food Administration, as the responsible authority, does not at all fulfill their task of caring for the animals. Last, it was the insufficient logbook control, and now this comes out as the latest in a long series of lawsuits that Animal Protection digs out because the board has no control over its own area, ”says Britta Riis.

GAIA calls for ban of live cooking of lobsters
Beef production drives deforestation five times more than any other sector
How is the exotic pet trade (un) regulated across the EU? Our report has been updated
How is COVID-19 impacting cats and dogs, and what support is needed?