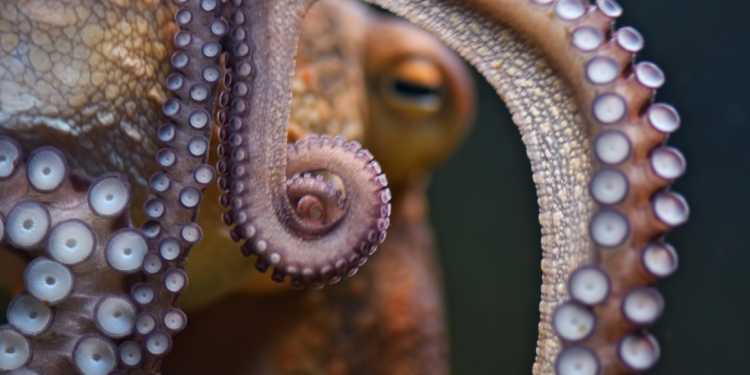 NGOs from all over the world have joined forces this World Octopus Day (8 October 2022) to call on the EU to ban the cruel and environmentally damaging practice of octopus farming.

Eurogroup for Animals and 36 other NGOs have written a joint letter to the European Commission warning that octopuses are ‘profoundly unsuited to farming and there are serious sustainability and animal welfare problems associated with the development of such an industry’. It also points out that allowing this practice would be in conflict with the EU’s own strategy on sustainable food production and calls for a ban on the importation of farmed octopus products.

The move follows announcements by company Nueva Pescanova that it plans to open the world’s first commercial octopus farm in Las Palmas de Gran Canaria. These plans sparked worldwide outrage when they were revealed last year.

A powerful report, Octopus Farming – A Recipe for Disaster, released by Compassion in World Farming, shows how octopuses are highly intelligent and sentient wild animals who would suffer greatly in unnatural factory farm conditions. Solitary in nature, these fascinating animals generally live and hunt on their own. Confining them to underwater tanks would also lead to high levels of stress which could lead to aggression or even cannibalism.

In addition, the cost of farming octopus to the environment would be high and unsustainable. Octopuses are carnivorous animals that would need to be fed huge amounts of human edible fish products just to be kept alive before their slaughter. In fact, to produce one kilo of octopus meat, three kilos of marine life would be needed as feed, leading to more over-fishing and pressure on other marine environments.

Earlier this week, the European Parliament adopted MEP Clara Aguilera’s report on “Striving for a sustainable and competitive EU aquaculture: the way forward”. This vote was a missed opportunity to call for a ban on introducing new carnivorous species, such as octopus, into industrial farming systems.

This World Octopus Day, we should be celebrating these incredible wild animals rather than allowing them to be confined in an underwater factory farm. It’s time to end factory farming – not expand it. Octopuses are highly intelligent, sentient beings that feel pain and distress. They should never be forced together in factory farms while other sea life is decimated in order to rear them. The EU must ban the farming of octopuses and other cephalopods to ensure this cruel practice cannot be developed.

To mark World Octopus Day, Eurogroup for Animals is co-hosting an online event with In Defense of Animals, Animal Save Movement and Plant Based Treaty, including a virtual book talk with author of The Soul of an Octopus, Sy Montgomery on Saturday, October 8 at 18:00 CEST.
Octopuses
Intensive farming
Letter
Food policy
Deel op FacebookDeel op TwitterDeel op PinterestDeel op Linked InDeel op Whatsapp