What’s the real cost of meat? New Italian report sheds light on the 36.6 billion euro bill, in terms of damage to the environment and to the health of consumers 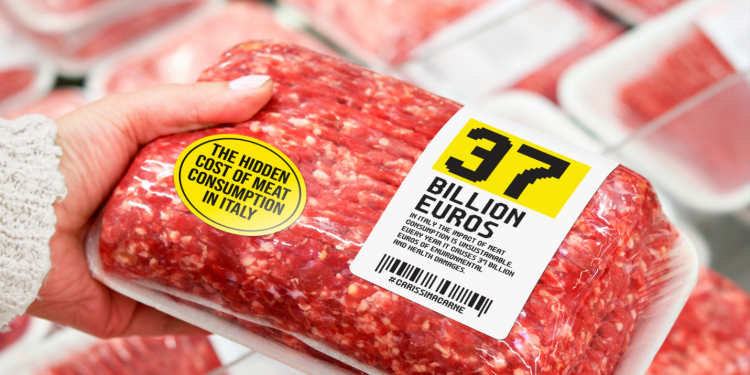 What’s the real cost of meat? New Italian report sheds light on the 36.6 billion euro bill, in terms of damage to the environment and to the health of consumers

New report on the hidden costs of meat consumption in Italy reveals the environmental and health impacts which fell on society. If we were to include the hidden costs, one kilogram of beef would cost on average 19 euro more.

The environmental and health costs of meat production and consumption are not included in the price paid when buying it. Citizens pay the price of these hidden costs which have now for the first time been scientifically quantified.

LAV, member of Eurogroup for Animals, commissioned the first independent scientific study on the environmental and health costs of meat consumption in Italy, focusing on the most consumed meat in the country: poultry, beef, and pig. The emissions generated at all stages, rearing, slaughtering, processing, packaging, distribution, consumption and waste treatment, have been converted into economic costs for society through a life cycle assessment (LCA) approach.

The environmental costs are obtained assigning a monetary value to the impact assessed via the LCA on 11 environmental categories (1). In one year, the emissions associated with the beef life cycle alone amount to over 18 million CO2 equivalents, with a hidden annual cost of over 1 billion euro. This is equivalent to the amount of greenhouse gases emitted by the largest and most polluting coal-fired power stations in Europe.

In addition to emissions of greenhouse gases, there are also the ones from particulates and acidifying gases in stables, and emissions of nitrates and pesticides into the soil. Together they generate the indirect cost of damaging ecosystems, for example agricultural losses due to acid soils and lack of pollinators due to pesticides.

The healthcare costs are estimated in DALY (Disability-Adjusted Life Year) and are based on the average daily consumption in Italy. Approximately 350,000 years of life are calculated to be lost each year in Italy due to meat consumption. The risks cover contracting colorectal cancer, type 2 diabetes, and stroke, and this is likely a conservative estimate, since the damage caused by other diseases associated with meat consumption, such as antibiotic resistance or cardiovascular diseases, were excluded due to the lack of a robust scientific literature.

The report shows the unsustainability of meat consumption in Italy and the same situation could easily be mirrored in other Member States. But alternatives exist: 1kg of chicken or pork generates 8 times more costs for society than the same amount of legumes; 1kg of beef generates costs multiplied by 23 times.

Eurogroup for Animals and LAV, based on the evidence found by the study, believe that it is time to bring forward the hidden costs of meat and implement policies to support the uptake of proteins of plant origin as an alternative to animal proteins. In order to move in this direction, it is essential that the numerous subsidies supporting the livestock industry, in different phases of the production cycle, are soon eliminated.

The results of this study are worrying and we also need to consider the suffering to animals the meat industry creates. In line with the Farm to Fork strategy, the EU has the ultimate opportunity to move away from harmful and pollutive intensive livestock farming systems and transition to a food policy that truly embraces humane and sustainable proteins production.

At a historic time when, after the COVID-19 pandemic, attention to the devastating potential of animal food production has increased, and when numerous international bodies warn that an urgent reduction in meat consumption is necessary, the results of this study must represent an inescapable fact for political actors, also with a view to achieving the Sustainable Development Goals of the 2030 Agenda and the Paris Climate Agreements. Thinking that we can achieve an ecological transition without immediately initiating a decisive food transition is illusory, or worse, it is false.

Methodology
The potential environmental cost has been estimated through a life cycle assessment (LCA) of meat consumption, converting the emissions generated at all stages of production (rearing, slaughtering, processing, packaging, distribution, consumption and waste treatment) into economic costs for society. The healthcare cost was estimated by converting the potential years of life lost (defined in the reference literature as Disability Adjusted Life Years - DALY) due to meat consumption into the economic value that is attributed on average to a year of life earned.

Demetra is an Italian consulting company expert on sustainability assessment of products, services, processes and organisation. Demetra evaluations are a support in decision-making strategies for their customers: companies, no profit organisations and public bodies.

LAV was established in 1977 in Italy, it promotes cultural change in the way we relate to other animals, with a view to achieving a lifestyle and making political choices based on respect for and solidarity towards all living beings, irrespective of their species. LAV is committed to stop any form of exploitation and suffering by asserting animals' rights and promoting the issuing and implementation of new laws. LAV is a member of Eurogroup for Animals, the European Coalition to End Animal Experiments, the Fur Free Alliance and ENDCAPtivity.