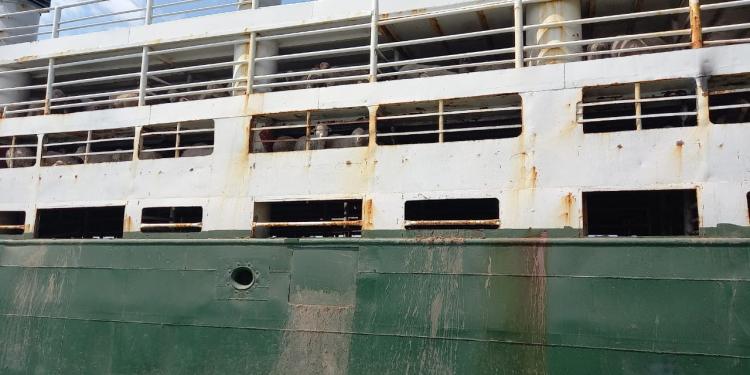 16 vessels transporting live animals from the EU to the Middle East were affected by the Suez crisis on 23-29th March causing delays that were deadly for thousands of sheep, mainly from Romania but also from Spain.

According to Animals International’s sources involved in this crisis, the mortality was between 180 and 1,100 on each vessel. But the mortality declared by the Romanian authorities was just not higher than 0,22% among the 105,727 sheep and 1,613 cattle aboard 7 of the 11 ships.

We seek to clarify this gigantic reporting difference by talking to those who transported the animals. We learnt that Dragon had the highest mortality with over 1,100 dead animals. The answer to the difference seems simple. Thousands of dead sheep have been thrown overboard in the Red Sea before reaching their destination. The 0,22% refers to the animals who continued to die from the throwing point to the harbor of destination.

Photos obtained by Animals International and from whistleblowers, indicate several breaches of EU laws. In one of the photos, it appears clearly that the vessel was overloaded, and animals were crammed not only in their pens but also on corridors that must be kept clear at all times, except during loading and unloading operations. Furthermore, the surviving animals were loaded for further transport in the Middle East onto trucks that are substandard according to the EU laws.

“EU Court of Justice rulings are clear. EU laws must be respected beyond its borders until the destination which is considered the place where the animals will stay for at least 48 hours. Upon arrival, the animals were unloaded from ships onto trucks and immediately transported further. These trucks were not protecting animals from injuries and the burning sun, they were crammed over each other”, added Paun.

Last but definitely not least, the Suez crisis indicates just another scenario never foreseen by the EU Commission and the Member States where there were no contingency plans for this situation. They had no legal means to order the vessels to return to the port of origin. The only reason that mortality was not closer to 100% is that the blockade ended after 6 days and not later. None of the vessels have decided to return to the port of origin and any extra day awaiting was equivalent to thousands of new deaths. “The Suez crisis exposes further weaknesses of EU animal welfare laws that must be subject to revision by the EU Commission and object to the ongoing EU Parliament inquiry on the transport of live animals”, concluded Paun.

Ultimately, all exported animals to the Middle East were killed while fully conscious by untrained and unequipped workers in breach of EU Slaughter Regulation 1099/2009.