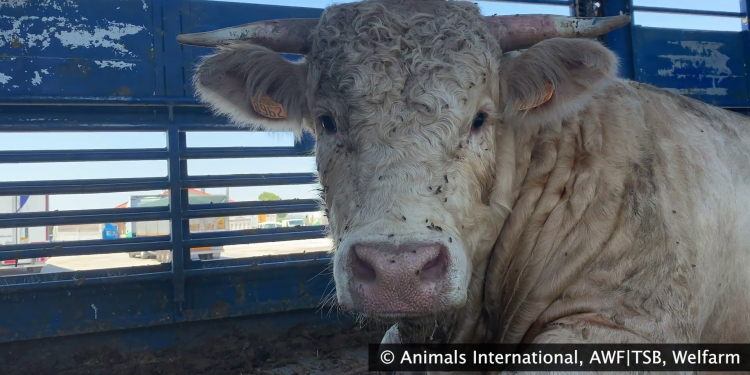 It only takes three videos for Eurogroup for Animals’ members Welfarm, Animals International and Animal Welfare Foundation to show the French government the horrifying state of play of what exporters and livestock breeders do to animals they export to North Africa and the Middle East. From European ports to Lebanese slaughterhouses to Moroccan cattle markets - four NGOs captured the dreadful fate of the thousands of French cows shipped across the Mediterranean every week. These investigations will be released by Welfarm over the next three weeks.

In a petition to the French government, Welfarm calls for the suspension of live animal exports to third countries. "The Ministry of Agriculture, exporters, breeders and the port of Sète are aware of these violations, yet they continue to export animals" states Adeline Colonat from Welfarm. And for good reason as cattle exports generated nearly 1.5 billion euros in 2018, of which 118 million went to third countries. "France cannot even detect and solve problems in its own slaughterhouses, so how can we imagine that we can have the slightest influence on what happens on the other side of the Mediterranean? The truth is that France no longer has any control as soon as the animals leave our soil. The only way to avoid their suffering is not to send them there alive. "

Eurogroup for Animals and its members urge the EU to stop live transport especially to Third Countries and to prepare a strategy to shift to a meat and carcasses and genetic material only trade.

Video 1: Death before boarding the boat

The first video of the investigation series is from July 2020 and sets the scene in Port of Cartagena, Spain, which calls itself a "pioneer in animal welfare": A cattle with fractured legs is dragging itself along the foot of a ship. Born in the Puy-de-Dôme, exported to Spain for fattening, it is to be shipped to Libya. A tractor will have to drag the paralysed and screaming animal into a lorry. Heading for the slaughterhouse. By law, it should have been euthanised on the spot, but in this case, it would be impossible to profit from his meat... Like this cattle, 425,000 French cattle are exported every year to Spain for fattening. How many then embark in Cartagena? “It’s impossible to say since they disappear from French statistics'', explains Adeline Colonat, head of the project team on transport in Welfarm, "but we are the leading supplier of cattle to Spain, which in turn is the leading exporting country in Europe.”

Maria Boada (Animal Welfare Foundation), who captured these images alongside Animals International and Welfarm explains further: "In European ports as well as in Third Countries, the lack of controls, infrastructures and sanctions is disastrous for animals. The presence of a veterinarian is not even compulsory on board of ships leaving the EU. Thousands of animals are deprived of care for days or even weeks”

December 2019, near Rabat, Morocco: The door of an overcrowded cattle house crushes the flanks of a French cow. Exported when it was just a pregnant heifer, it finds itself like the others on a cattle market. Other cattle have their legs tied up, their heads covered with plastic sheeting. Goats are piled up on a wheelbarrow. Despite the fact that French and European exporters claim that the animals sent to Africa are well-treated because they are intended for breeding (like heifers), these new investigations from the non-profit organisation Animals' Angels show that they all end their lives in the same suffering; at the same livestock markets and in the same slaughterhouses.

Video 3: Slaughtered with a cruelty that nothing justifies

August 2020: In the footage taken by Animals International and Animals Angels in Lebanon and Morocco, all of the cattle suffer the same fate: beating, terror, endless suffering. “Both in the Middle East and in North Africa, I have seen French animals endure a slow and painful death because of workers who are neither equipped nor trained and who are afraid of these big cattle," says Gabriel Paun, Animals International's Europe Director. They use ropes to retain them, they stab them and slit their throats. The animals are terrified, they suffer and are conscious until the very end. These practices are extreme, useless and go against all religious precepts in force in the importing countries. And moreover, these practices would be illegal in France".