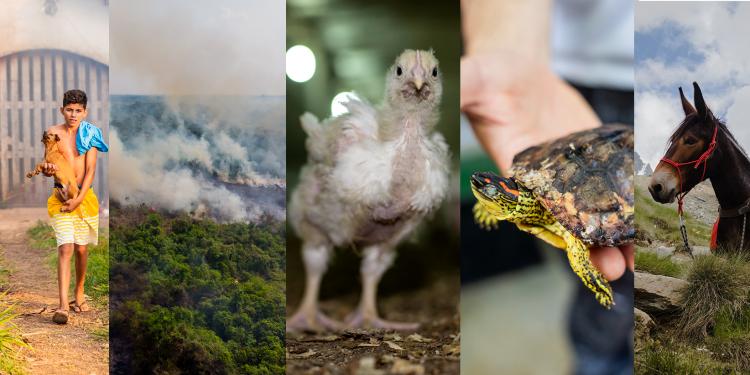 On Monday 15 June, Eurogroup for Animals held a webinar entitled “Animal welfare and SDGs: How should EU trade policy help?” and officially launched its report on “Animal Welfare, Trade and SDGs”.

The event was co-hosted by two MEPs sitting on the International Trade Committee, Marie-Pierre Vedrenne (Renew Europe, FR) - vice-chair of the committee - and Saskia Bricmont (Greens/EFA, BE) and was the occasion to launch Eurogroup for Animals’ report on Animal Welfare, Trade and SDGs”. “Animal welfare is increasingly recognised as an important element of a sustainable production system” said Marie-Pierre Vedrenne, insisting that the EU should better address animal welfare in trade policy. This for three main reasons: consumer safety, fair competition and level-playing field. In addition, she reminded the audience that EU citizens want to see EU animal welfare standards applied to imported products. Saskia Bricmont (read her post-event report here) called for more coherence between EU policies, underlining the positive impetus created by the launch of the Farm to Fork and Biodiversity strategies and for animal welfare to be addressed transversally in EU policies, including trade.

Following this introduction, Prof. Linda Keeling presented her academic study on “Animal Welfare and the United Nations Sustainable Development Goals”, which scored the interactions between SDGs and Animal Welfare, in both directions. Her conclusion was that, even if animal welfare is not explicitly mentioned in the SDGs, it is positively linked with all of them, to various degrees. Higher welfare does not impede any SDG. To the contrary, while, for some of them, the mutually beneficial effect is strong (SDG 12 “Sustainable Consumption and Production” and 14 “Life Below Water”), in some cases, higher welfare would have a direct positive impact on the SDGs (SDG 1 “End Poverty”, SDG 2 “ Zero Hunger”, SDG 3 “Good Health and Wellbeing”). She concluded that improving animal welfare could be a good way to achieve these goals.  Then, Mr. Flavio Coturni, Head of the “Agricultural, sanitary and phytosanitary market access and biotechnology” Unit in DG Trade, reacted to these presentations underlining the positive elements on trade in the Farm to Fork strategy, in which the EU calls for trade policy to be used to not only enhance cooperation but also to obtain commitments from third parties on animal welfare.

The second part of the webinar was dedicated to the presentation of three case studies. Firstly, Tais Toledo, Corporate Social Responsibility Manager at Animal Equality Brazil, described the potential impacts the EU-Mercosur trade deal could have, if ratified, on health (potential increase of antimicrobial resistance) and deforestation, notably through the fuelling of intensive farming. She reminded that “The EU was the biggest international driver of deforestation in Brazil between 2002 and 2006” and that “deforestation in Brazil registered a peak that coincided with an increase in Brazilian meat imports by the EU”.

Then, it was the time for Dr. Joe Collins (chair of Eurogroup for Animals Equines Working Group)  to speak in order to present his case study on working equids and to highlight how by improving the welfare of these animals developing countries can positively impact several SDGs, including on gender and education. The last case study, by Professor Thijs Kuiken, was dedicated to the link between, on the one hand, the emergence of infectious diseases and, on the other hand, the intensification of animal farming and the trade in live animals.