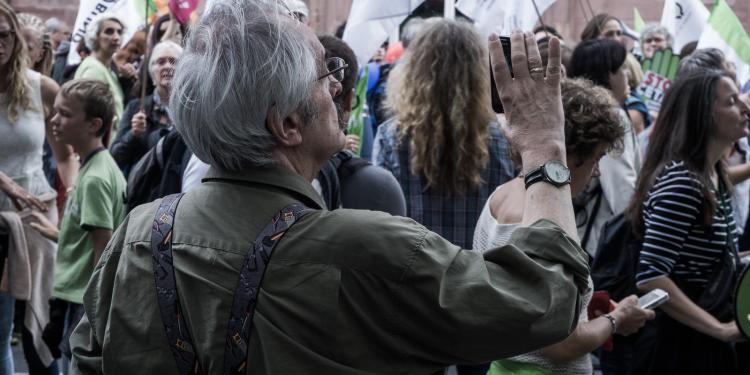 News
TTIP was a bad deal for animals. We should be happy it is off the table for now. But the fallout from this has made our work even harder.

It was identified early on that 2016 represented an important political window for TTIP. It needed to be finalised ahead of US elections at the end of the year and Dutch, French and German elections in 2017. Its fate beyond these elections was highly uncertain. Uncertainty came sooner than expected with the Brexit vote becoming a mitigating factor in summer 2016. This began to make negotiations more difficult. During the summer of 2016, speculation grew that TTIP might be dying a death.

However, Commissioner Malmström continued trying to convince the public that negotiations were ongoing, despite France’s trade minister calling for negotiations to halt during a meeting of trade ministers on 23 September 2016 in Bratislava. The 15th round of TTIP negotiations took place in New York in October 2016 within this rather precarious context. Agricultural issues saw no progress at this Round, remaining a contentious issue between the partners.

Finally, the EU seemed to admit defeat following the election of Donald Trump in November 2016. The EU and the US prepared a Joint Declaration published on 17 January 2017 setting out the progress made so far in TTIP negotiations before placing negotiations on “deep-freeze”.

The silence from the Trump administration on TTIP since the election has been deafening. Even now, in July, the US’s intentions and plans regarding TTIP negotiations remain unknown. While much of civil society has breathed a sigh of relief at this, Eurogroup for Animals is not convinced that TTIP on ice, Trump’s protectionist stance, and the consequent panic in Europe have not necessarily been good for animal welfare.

The real bottom line is that international trade is one of those unavoidable facts of life, like taxes or death. Despite recent anti-internationalisation sentiment, trade will continue. This is because it offers massive economic benefits and because increased trade often correlates with better diplomatic relations (and therefore peace). The gap left by TTIP is being filled with EU-Japan, EU-Mexico, and EU-MERCOSUR. All of these deals pose the same risks to animal welfare, if they are not properly guarded against in the text of the agreements negotiated. The danger is even stronger because, in the context of rising protectionism, the EU wants to be seen as a beacon of light to our trading partners.

The bottom line is that unrestricted, irresponsible trade will always endanger animal welfare.

First, in the EU’s market access offer, it was proposed that shell eggs be conditionally liberalised on the basis that import tariffs may only be eliminated if the products comply with European animal welfare standards. Non-certified shell eggs would remain subject to current EU import tariffs. This would have provided the US with an economic incentive to improve animal welfare. It was expected that the US negotiators would challenge this EU position, but its fate remained unclear when negotiations were frozen. The EU did not take the initiative to propose conditional liberalisation for any other animal products but it is immensely positive to see that the Commission at least is willing to listen to us when we ask for conditional liberalisation of animal products.

Eurogroup’s advocacy efforts saw a successful conclusion with regard to the TTIP Sustainability Impact Assessment (SIA). This SIA was the first to come from the Commission to include specific language on farm animal welfare. The report acknowledges the different levels of protection in the EU and the US, citing the importance of animal welfare to European citizens, and noting that adoption of EU animal welfare standards by the US would be trade-enhancing, but ensuring compliance would pose a challenge. The SIA also addresses research animals and wildlife. SIAs are conducted by independent consultancy agencies and are not binding on negotiations but it is interesting to note the Commission’s response to these SIAs. It is very regrettable that the Commission decided to ignore the animal welfare aspects of the report in its response. It seems that the Trade & Animal Welfare Project will need to make its voice heard also during the period in which the Commission is drafting its response.

Trade at Any Cost

The EU is setting itself up as ‘’open for business’’. For this reason, it is accelerating its trade negotiations and the quality of the agreements is being put at risk. So, bear this in mind when you tentatively cheer that TTIP is on ice, because there is a danger that this may push the EU to pursue trade at any cost (to borrow a phrase from Tony Blair). Commissioner Malmström has claimed that US protectionism is helping the EU because more countries are approaching the EU for trade deals.

The constant cry amongst Commission officials in 2017 is that negotiations must be sped up. For EU-Mexico, for EU-Japan, for EU-MERCOSUR, everything must go at full speed. This is dangerous for animal welfare because the EU appears willing to plough through difficulties in order to reach quick agreements. Invariably, animal welfare is difficult because our trading partners usually do not agree that it should be a priority and mentioned in the text of a free trade agreement.

As civil society actors, we need to find the best way to ensure that trade policy respects and protects societal values such as animal welfare. This is an achievable goal. Trade is strongly permeating into public discourse in today’s unique political climate in a way it has seldom done before. This means that it is more realistic now than in previous years to engage civil society to a sufficient extent to be able to hold the EU accountable in its trade policy setting.

TTIP was a bad deal for animals. We should be happy it is off the table for now. But the fallout from this has made our work even harder. The momentum that built up around TTIP in civil society must continue. It is vital for animal welfare that we recognise the risks that were posed there, are posed in other negotiations too. If a lesson is to be learned from TTIP’s freezing, it is that trade liberalisation, in some form or another, will continue.