A transatlantic coalition of more than 450 civil society organisations calls on political leaders to stop the EU-Mercosur agreement. 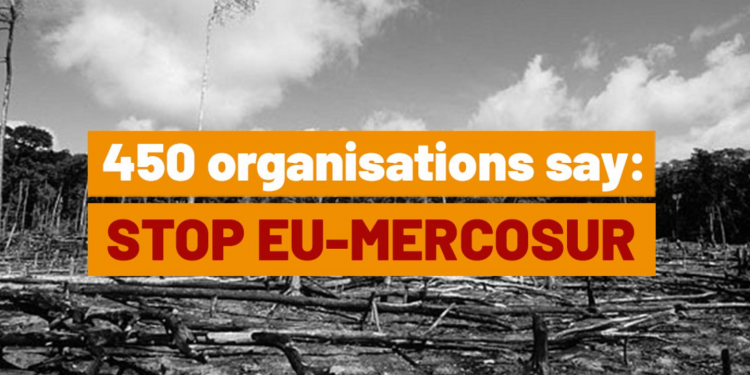 A transatlantic coalition of more than 450 civil society organisations calls on political leaders to stop the EU-Mercosur agreement.

Press Release
On 15 March, a coalition of more than 450 civil society organisations from both sides of the Atlantic held a press conference showing why the EU-Mercosur trade agreement is a bad deal for people, workers, animals, and the environment.

On 28 June 2019, after twenty years of negotiations, the EU and Mercosur announced the conclusion of an unprecedented free trade agreement. If implemented, the agreement will further fuel deforestation, violation of human rights and animal cruelty, thereby destroying livelihoods in both Europe and South America, hurting family farms, workers and indigeneous people. The agreement signals that human rights abuses linked to the supply chains implicated in the deal are acceptable.

For this reason, the coalition of CSOs calls on political leaders from the EU and Mercosur to stop the agreement. Bettina Müller from PowerShift in Berlin said “The EU-Mercosur agreement belongs to an out-dated 20th Century model of trade that has failed the planet. It serves corporate interests at the expense of planetary boundaries, and drives untenable social inequalities.”

Gabriel Casnati from Public Services International Interamericas in Sao Paulo added: “Trading agricultural commodities for polluting cars, the deal poses an imminent threat to industrial jobs in Mercosur countries. It perpetuates the path dependency of South American economies as cheap exporters of raw materials obtained through destruction of vital natural resources rather than fostering the development of sound, diversified and resilient economies.”

Following strong pressure from civil society, several Member States - like Austria, France, Belgium and Luxembourg - and the European Parliament, have expressed their concerns, and the ratification procedure is on hold. The European Commission is conducting discussions with Mercosur countries about “pre-ratification conditions”, which could possibly result in an additional protocol to the agreement. But the coalition argues that an additional protocol or a declaration would not solve any of the issues raised by the agreement as the text of the agreement would not change. The Trade and Sustainable Development (TSD) chapter, for instance, would remain aspirational and not enforceable.

The goals and core elements of this agreement are in direct opposition to social justice, job creation, climate action, food sovereignty and upholding human rights and animal well-being. At times where the EU is adopting the Green Deal this agreement must be stopped.

As pointed out in the statement, supported by more than 4500 organisations from the EU and Mercosur countries, for a viable future, a 21st century trade model must support rather than undermine efforts to create socially just and ecologically resilient societies based on the principles of solidarity, protection of human rights and our planetary boundaries. Therefore the coalition asks political leaders to act accordingly and in the interest of the people, not profits, and stop the EU-Mercosur agreement.

In parallel with the press conference, the coalition launched the website StopEUMercosur.org a hub for citizens gathering all the resources they could need and listing actions they can take to stop the agreement.

Seattle to Brussels Network  is a network of development, environment, human rights, women’s and farmers’ organisations, trade unions, social movements and research institutes. The network was formed in the aftermath of the World Trade Organisation’s (WTO) 1999 Seattle Ministerial to challenge the corporate-driven trade agenda of the European Union and European governments. It has also developed as a response to the increasing need for European co-ordination among civil society organisations.
EU-Mercosur
Deel op FacebookDeel op TwitterDeel op PinterestDeel op Linked InDeel op Whatsapp