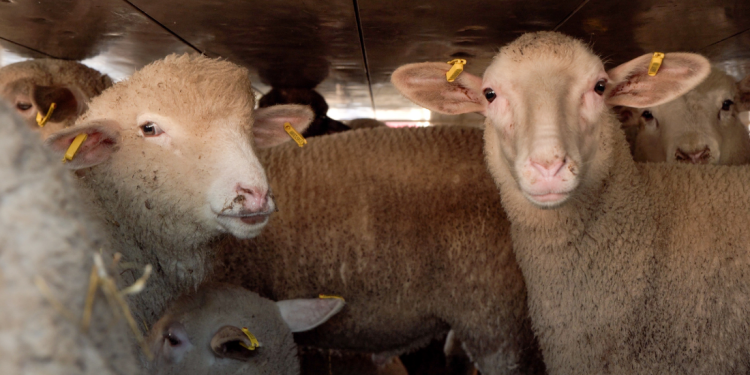 During Essere Animali’s roadside checks with MEP Eleonora Evi, three trucks carrying lambs were sanctioned by the traffic police. The conditions were not adequate to guarantee that the animals could move naturally. In one case, a lamb traveled for hours with one leg stuck between the bars of the truck.

Our member organisation Essere Animali recently carried out checks of the trucks used to transport live animals that pass through the border with Slovenia to Italy.

Two vehicles from Hungary and one from Romania, each carrying over 700 lambs across four floors, were identified at the border with Slovenia. They were reported to the authorities and followed at a distance for a total of over 2,500 km, until the traffic police intercepted them. The vehicles were sanctioned under Legislative Decree 25 July 2007, n. 151 which provides for the sanctions for the violation of the provisions stipulated in European Regulation 1/2005 on the protection of animals during transport and related operations.

In particular, the violations concerned the insufficient height of the compartments, which did not allow the animals to move naturally. The lambs' heads touched the upper floor of the compartment, a condition that can cause bumps, bruises, and burns, as well as preventing adequate ventilation of the compartments. For violations of the provisions on animal welfare during transport, penalties can reach up to 6,000 euros.

Essere Animali’s activists also filmed a lamb that traveled for hours with one leg stuck between the truck bars, as well as issues related to the watering system installed in the vehicles, which several organisations have denounced as unsuitable for some time as it puts lambs at risk of suffering from thirst and potentially dehydration.

Last January, the European Parliament approved a series of recommendations drawn up by the ANIT Committee which do not place animal welfare at the centre of the revisions. In fact, the text approved by the majority of MEPs does not propose adequate solutions to numerous urgent problems, including the transport of animals over long distances (over 8 hours), and that of unweaned animals.

We thank MEP Eleonora Evi for her valuable collaboration, and police forces for their timely intervention. We will inform the European Commission and the Minister of Health of the outcome of the violations, providing images that document this alarming reality. The European Regulation, in addition to being frequently violated, is unable to concretely protect animals. Today it is legal to transport lambs less than two months old for journeys lasting up to 30 hours, subjecting them to conditions that cause them great stress and suffering. Together with other NGOs from all over Europe, we are calling for greater animal protection, such as a ban on the transport of live animals over long distances and unweaned animals. The European Union has the opportunity to really improve the conditions of animals; it shouldn’t betray the demands of its citizens.
Simone Montuschi, President, Essere Animali