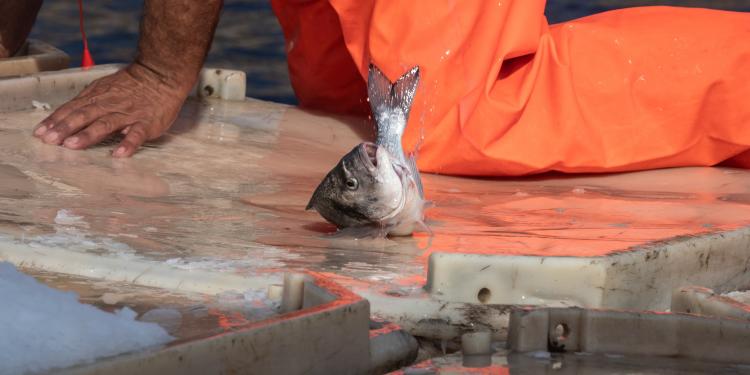 Eurogroup for Animals' member Essere Animali is releasing shocking new footage that reveals overcrowded and stressful conditions, high death rates and fish enduring terrible suffering as a result of slaughter methods that fall short of international animal welfare standards. The investigation, carried out in collaboration with We Animals Media on fish farms across Greece, once again uncovers the dark side of aquaculture and the terrible suffering of fish raised for food consumption.

Greece is the EU’s largest producer of farmed European sea bass and gilthead sea bream, exporting to over 42 countries. In 2019, the country supplied 59% of the sea bream and sea bass sold in the EU – Italy, Spain and France being the major markets – and 22% sold worldwide. Sea bream and sea bass are the main fish species consumed in Italy, both in terms of volume and value.

Essere Animali’s investigators witnessed the cruel and painful slaughter of fish on farms.

The video shows sea bass and sea bream captured and crammed into nets, where they are exposed to air and crushed by the weight of other caught fish. Once out of the water, they are thrown, still alive and fully conscious, into containers filled with water and ice. In the attempt to escape, they writhe in agony and wound each other, as shown by the blood in the containers. They do not lose consciousness immediately and can suffer for many dozens of minutes before suffocating to death.

As far as the protection of farmed fish during slaughter is concerned, Council Regulation (EC) No 1099/2009 on the protection of animals at the time of killing clearly states that fish ‘shall be spared any avoidable pain, distress or suffering during their killing and related operations’. Live chilling in ice slurry without prior stunning is a procedure that causes huge distress and enormous suffering in fish. According to the animal welfare norms outlined in the Aquatic Animal Health Code of the World Organisation for Animal Health (OIE), this slaughter practice results in poor fish welfare.

Although asphyxiation in ice slurry falls short of the OIE’s international standards, it is still the slaughter method most commonly used to kill farmed sea bass and sea bream, and sometimes other species, not only in Greece but also in many other Member States, as highlighted by the European Commission in a recent report published in 2018 and shown in a previous investigation in Italy that Essere Animali released in 2018.

The Greek government took the lead in developing fish welfare guidelines, adopted by the EU Platform on Animal Welfare, and technical experts in Greece have worked with the sector to produce detailed guidance specifically for seabass and seabream. These are significant and concrete steps towards consolidating current knowledge and best practices, but there remains a lot of work to do to have the needs of fish met across commercial aquaculture production.

“Our footage clearly reveals that the absence of stunning at the time of slaughter is a major animal welfare concern for fish, which are sentient beings that, like all animals, feel pain and can suffer. It is unacceptable that cruel slaughter practices such as live chilling in ice slurry without pre-stunning are still so widely adopted across fish farms,” said Simone Montuschi, President of Essere Animali. As part of their #AncheiPesci (#FishToo) campaign, Essere Animali is currently targeting major Italian retailers, to encourage them to commit to higher fish welfare practices and sourcing policies throughout their supply chain."

The video also shows underwater cages filled with hundreds of thousands of fish. Sea bass and sea bream can spend up to 2 years in these barren and overcrowded environments where they cannot meet their physiological and ethological needs. Overcrowding is a source of chronic stress for fish. It can impair their immune system and lead to poor water quality and the spread of diseases. The footage reveals dead fish floating on the surface of the water: in the on-growing phase, the mortality rate for sea bass and sea bream farmed in the Mediterranean is 15–20%, as confirmed by the owners of the farms investigated. 50% of mortalities are attributable to disease.

Intensive aquaculture production not only poses a threat to animal welfare, but also to the environment. Net pens are inherently open production systems that allow the discharge of organic waste, antibiotic residues and chemicals into the surrounding environment, adversely affecting habitats contiguous to fish farms. Moreover, species such as sea bass and sea bream are carnivorous. In order to produce 1 kg of sea bass and bream, farmers generally use 2 kg of feed, almost a third of which is composed of marine ingredients such as fishmeal and fish oil. This means that aquaculture is putting increased pressure on wild fish populations, which are caught and exploited by the billions only to feed farmed fish.
Read more at source
Essere Animali
Fish
Fish welfare
Aquaculture
Investigation
Greece
Deel op FacebookDeel op TwitterDeel op PinterestDeel op Linked InDeel op Whatsapp