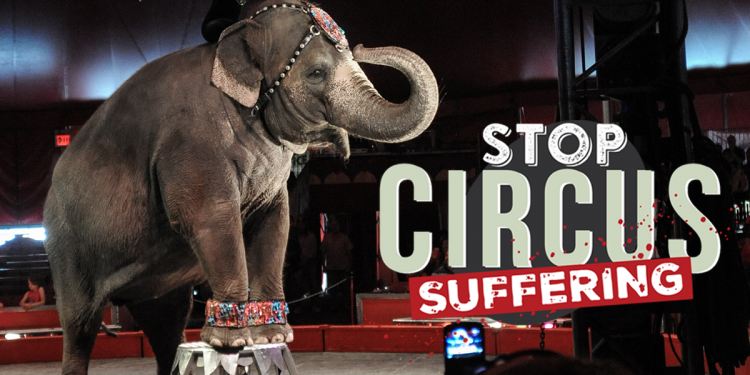 Press Release
On 3 March we celebrated World Wildlife Day with the official launch of the “EU Stop Circus Suffering” campaign, calling for an EU Ban on the use of wild animals in circuses. A new opinion poll confirms that this is what the 68% of Europeans are asking for.

23 Member States have already adopted national legislation restricting the use of either all, or exclusively wild, animals in circuses, reflecting the public’s position on ethical and animal welfare grounds. Statements from animal experts and veterinary bodies backed up these decisions.

However, France, Germany, Italy and Spain don’t have any national restrictions and Czech Republic, Finland and Hungary only adopted restrictions on the use of some species of wild animals.

The results clearly show there’s no more room for this cruel entertainment:

Circuses are travelling entertainment services moving around Europe, and performing wild animals are transported across Member States, where circuses pose severe public safety and animal health and welfare risks. That’s why we call for an EU wide ban on the use of wild animals in circuses, since bans at the national level won’t prevent these movements with all the risks and distresses for the animals.

Only an EU wide ban can guarantee the end of this outdated entertainment and provide a coherent and effective solution to the physical and emotional suffering of wild animals in circuses. The Commission should take the wishes of EU citizens very seriously and use their powers to finally end this unnecessary suffering while confirming the EU as the International leader for animal welfare.

Nearly 1 million citizens have already signed the Infocircus petition, with the “Stop Circus Suffering” campaign we will keep backing the strong public support and move a step further bringing this request at the institutions level.

Methodology: Savanta ComRes interviewed 7,425 adults across the Czech Republic, France, Germany, Hungary, Italy, Poland and Spain online from 8th to 17th February 2021. Data were weighted in each country to be demographically representative of all adults by age, gender and region. Savanta ComRes is a member of the British Polling Council and abides by its rules.