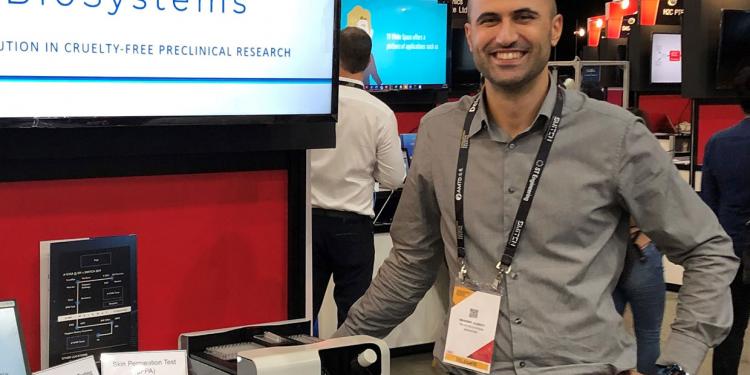 News
Massimo Alberti is co-founder and CEO of Revivo Biosystems, a Singapore-based company whose platform can test ingredients in drugs, cosmetics, and other consumer products on human tissue samples and lab-grown simulants.

The company’s organ-on-a chip systems are disposable, multichamber, plastic microfluidic chips for studying the permeation and safety of chemicals. A tissue sample is placed—or a human cell-based simulant is grown—in between two chambers. The chemical of interest is placed in one chamber. If any of it passes through the tissue or any marker is produced by the tissue as a response to the chemical, it is picked up by fluid flowing under the tissue in the other chamber. The fluid then is deposited in wells, so a researcher can measure how much of the chemical passed through or was released by the sample.

Conducting permeation experiments using Revivo’s system is less expensive than current methods because smaller skin tissues—as little as 50 square millimeters—can be used. Consequently, smaller amounts of the drugs can be tested, because for the same dosage, the exposure area is smaller. And with Revivo’s platform, the testing procedures can be automated, so the labor costs can be reduced up to 10 times, Alberti says.

Revivo’s platform can be used for a variety of human tissue models, not just skin. Tests done on such tissue are more reliable than those performed on animals, Alberti says. Animal testing not only harms animals; it’s also ineffective because animals are genetically and biologically different from humans. In addition, only about 10 percent of experimental drugs tested on animals actually reach or pass the human clinical-trial stage, Alberti says.