Sri Lanka bans cow slaughter, but has yet to pass animal welfare bill 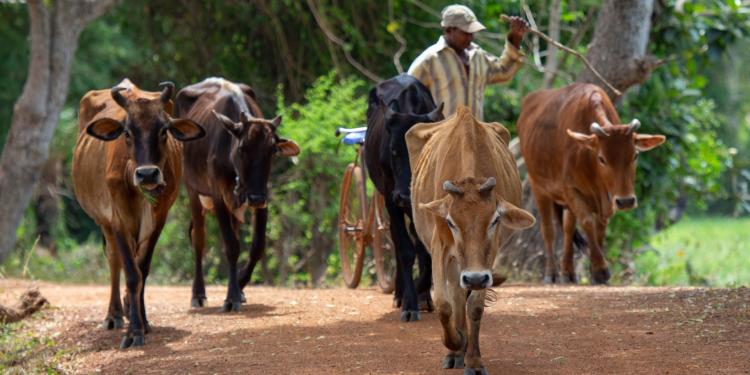 Sri Lanka bans cow slaughter, but has yet to pass animal welfare bill

News
The Sri Lankan government will be amending the Animal Act after the Cabinet approved a proposal by Prime Minister Mahinda Rajapaksa to ban the slaughter of cows in this predominantly Buddhist country.

However, animal rights activists point out that there are no animal welfare laws in the country, and a bill to enact an Animal Welfare Act has been blocked in parliament since 2006.

After the Cabinet approved the proposal on September 28th the government released a statement presenting it as a rural economic self-reliance measure.

“As a country with an economy based on agriculture, the contribution of the cattle resource to develop the livelihood of the rural people of Sri Lanka is immense,” the government said in a statement. “Various parties have pointed out that the livestock resource that are required for traditional farming purposes is insufficient due to the rise of cattle slaughter and the insufficiency of livestock resource is an obstacle to uplift the local dairy industry”.

The statement further said that this decision would help to uplift the rural economy by developing a dairy industry, as well as saving a  substantial amount of foreign exchange, that is now spent on importing milk and milk powder. Immediate steps are to be taken to amend the Animal Act of 1958 and the Cow Slaughter Ordinance of 1893.

“The ban on cattle slaughter is part of the tradition of Dharmic religions” argues animal rights activist and lawyer Senaka Weeraratne. “Once these countries became colonies the ban was lifted and all three European powers Portuguese, Dutch and British freely encouraged the locals to flout tradition and Buddhist precepts by eating meat and drinking alcohol”.