Spanish bullfighting financed with € 130 million from the EU's CAP! 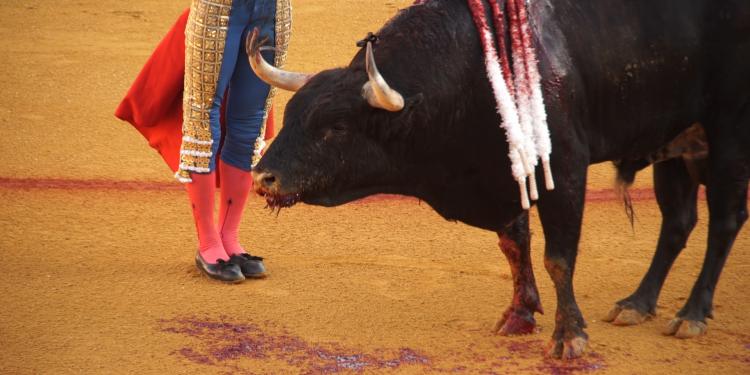 Spanish bullfighting financed with € 130 million from the EU's CAP!

Even though Corrida - opposed by the majority of EU citizens and MEPs - poses serious hazard for public health and safety, the bullfighting shows are still heavily subsidized with the European tax payers' money. LAV asks the European Commission to stop financing this inherently cruel tradition once and for all.

Between the end of September and the beginning of October 2019, LAV filmed and gather information from three Corrida shows in Algemesi, Seville and Madrid. Apart from serious animal welfare violation caught before, during and after the shows, interviewed witnesses confirmed to receive subsidies from the EU with specific “expedients” together with funds from the local government. In particular, bullfighting is funded by the national government, regional governments, provincial councils (Diputaciones) and municipalities.

When summed up, 571 million euros come from funds for bullfighting allocated by different Spanish authorities while about 130 million euros come from subsidies allocated by the European Union to bullfighting - essentially through the CAP. Making up to 31,6% of the income for farms intended for bullfighting, CAP funding is essential for the farms' economic sustainability despite of the fact that in 2016 the EP approved no use of “CAP funds or any other European funding line to economically support bullfighting activities involving the death of the bull”.

Bullfighting is an unacceptable show, contested for years because it is contrary to ethics and the protection of animals, non-educational offered to children, even though 84% of young Spaniards disapprove of this show

While 84% of young people in Span disapproved of this tradition in 2015, this is a consolidated trend. In 2008 a survey reported 67% of people interviewed having no interest in the show, while just 12 years later that number grew to 81%. It is clear to everyone that Corrida is now undergoing a serious crisis.

This June the Spanish Ministry of Culture published new data stating that the shows in the arenas in 2019 decreased by 63.4% compared to 2007. However, bull farms destined for bullfighting have increased from 1327 to 1339. In addition, in 2019 there were 9,993 registered professionals in the Bullfighting sector, compared to 7,907 in 2017.

All these support the evidence of how 31.6% of revenue from CAP funds, together with the additional funds received nationally, are invested in the revival of this cruel tradition.

How can the European Union finance this cruelty? It is time to say “no”: we urge the Commission and the EU Parliament to immediately stop subsidizing Corrida with public funds (CAP) intended for agriculture and not for torture.

Today more than ever, in the Covid-19 emergency, we can't ignore the health risks of arenas where the blood of these animals is sown and where the animals are slaughtered on the spot with dubious standards of health safety. This is an irresponsible act!

Below you can read more information from the investigation which is captured in the report published by LAV (in collaboration with our member organisation AVATMA, Animal Guardians and La Tortura no es Cultura).

This investigation provides more evidence as to why the new CAP needs to take into account animal welfare practices. It also demonstrates that Member States need to get this practice disqualified as a tradition and proactively ban it, to better protect the welfare of these animals and to get this cruel practices stopped once and for all.