Spain: 5,000 cattle found in awful conditions in a vessel bound for Egypt 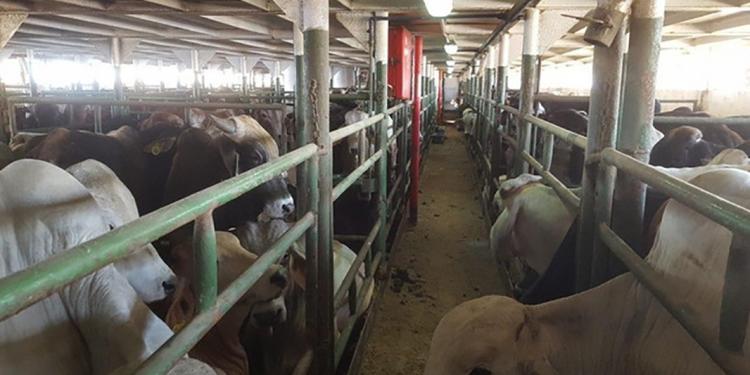 Spain: 5,000 cattle found in awful conditions in a vessel bound for Egypt

5,000 cattle were found in appalling conditions on the F. M. Spiridon docked in Spain at the end of last month, despite its authorising country, Colombia, having signed up to the World Animal Health Organisation (OIE)’s Terrestrial Code. Given the frequency of serious welfare issues in live export by sea, Eurogroup for Animals calls on the Commission to use the opportunity of the revision of the Transport Regulation to ban this trade for good.

According to Spanish media, the F. M. Spiridon, which is blacklisted under the Paris Memorandum, was inspected by Spanish authorities because of suspected narcotic substances after arriving in Las Palmas in Gran Canaria, Spain on 27th May. However, the  authorities were unable to carry out their inspection due to the deplorable conditions of the animals on board. 5,000 cattle were being transported in overcrowded conditions, standing  on a thick layer of excrement and showing clinical signs of starvation.

Evidently several cattle had died during the journey from Colombia (South America) towards Egypt, as bodies were piled in another part of the vessel. Due to the ammonia and the smell of the animals’ bodies decomposing, the Spanish authorities wore breathing equipment before entering.

The F. M. Spiridon was approved by French authorities in September 2015 and inspected by the Animal Welfare Foundation (AWF) in March 2016 at the port of Rasa in Croatia. Even then the investigation revealed, among other things, a risk of injury due to the design and construction of the pens, insufficient deck height for adequate ventilation, inadequate handling of the animals and overcrowding.

Since the beginning of 2020, the F. M. Spiridon has been exporting animals from Spain and Croatia to non-EU countries. Confronted with this latest evidence, AWF immediately contacted the EU National Contact Points asking for in-depth inspections every time this vessel enters a EU port. In addition, to prevent animal suffering, it urged the French government to immediately withdraw the vessel’s certificate of approval.

Despite Colombia, the departure country, and France both being members of the World Animal Health Organisation (OIE), the conditions on the F. M. Spiridon are out of line with the requirements laid down in the OIE terrestrial code for sea transport (Chapter 7.2).

Although Eurogroup for Animals ultimately wants to put an end to this horrendous trade, in the meantime it is calling on the EU Commission to urgently develop harmonised and binding standards for the authorisation of livestock vessels, as well as to centralise the issuing of certificates of approval.