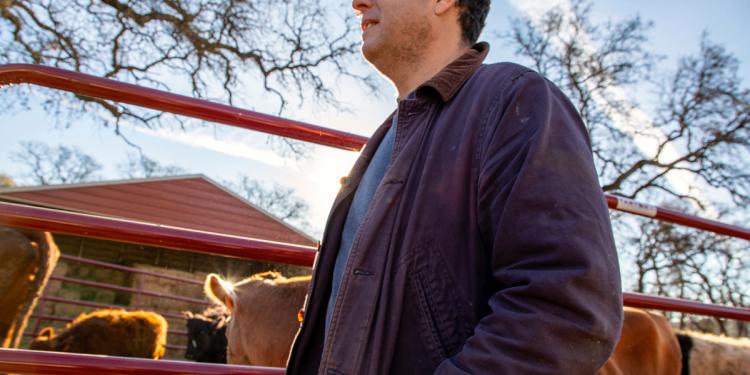 News
At Long Dream Farm in the Sierra Nevada foothills, the Abrahams allow their heritage breed cattle to live out their lives and serve as partners in food production.

Andrew Abrahams is explaining how Long Dream Farm works—by treating animals like partners in food production—when he notices a cow nuzzling the gate to the milking room. “So, here’s Emily,” he says. “She’s very smart. She’s going to try to get this gate open, and she’s pretty capable of doing it.”

In the end, Emily doesn’t manage to open the gate. But knowing each cow is just one part of the philosophy behind this no-slaughter farm that puts the highest emphasis on animal welfare. “I can’t conceive of not knowing the names of all the cattle, knowing their histories,” Abrahams says. “It’s important to understand who their friends are, who they’re related to… I wouldn’t want to do this if I couldn’t be completely hands-on, because I think there’s so much value originating from that.”

Andrew Abrahams and his wife, Krista, established Long Dream in 2011 on a 90-acre home farm, plus hundreds of acres of grazing land, in Northern California’s Sierra Nevada foothills. The farm is home to 190 heritage-breed cattle, plus chickens, donkeys, emus, guinea fowl, horses, pigs, seven working dogs, and one alpaca.

At most dairies, farmers are not on a first-name basis with their cows. One farm can have hundreds or thousands of cows that eat in indoor stalls or crowded feedlots. These operations push cows hard to increase milk production, which often translates into twice-a-day milkings, hormone injections, and too-frequent pregnancies, with calves separated from their mothers just hours after birth. After three or four years, when a cow’s milk production starts to decrease, she is sold and slaughtered for hamburger meat.

Consumer poll shows: Over half of adults say they would like to try cultivated meat
Kaufland commits to end the sale of live carp in Slovakia
Essere Animali forced to censor videos of investigations of two Grana Padano dairy farms

Consumer poll shows: Over half of adults say they would like to try cultivated meat
Success: no more pedigrees for pugs and French bulldogs in the Netherlands
A chance for European citizens to end the shark fin trade
Eurogroup For Animals and the Canadian Horse Defence Coalition call for EU and Canada to address horse welfare under CETA