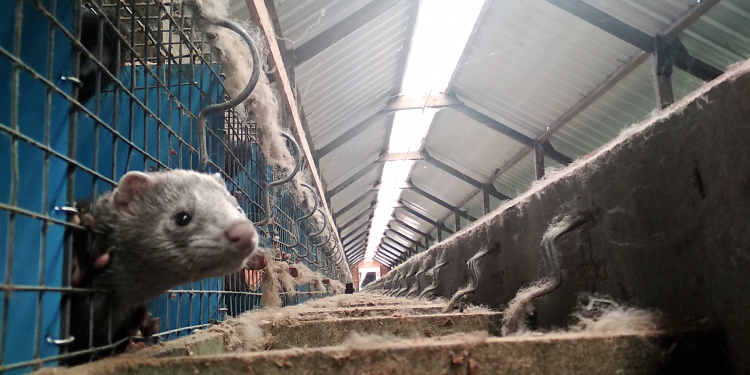 Activists from Otwarte Klatki in Poland published the shocking results of a two-month-long investigation at the largest fur farm in Poland. The undercover activist employed at the mink farm documented, among others, cases of cannibalism, open wounds and untreated sick animals. The case was reported to the authorities.

The investigation was carried out by Yevhen, an activist connected to Open Cages Ukraine. On June 16th Yevhen started working for a mink farm in Góreczki, where, using a telephone and a hidden camera, he documented its activities for two months. The farm is owned by Wojciech Wójcik, brother and business associate of Szczepan Wójcik, President of the Polish Fur Industry. It is the largest one in Poland, and probably even in the world: according to the testimony of the employees, there may be up to half a million animals.

Recordings from the farm in Góreczki show numerous cases of cannibalism, aggression, self-aggression, open wounds or limbs paralysis among the minks says Bogna Wiltowska, Director of Investigations and Intervention at Otwarte Klatki.

“The Wójcik Brothers boast on every occasion about the excellent animal welfare that, in their opinion, prevails at their farms, blaming activists for publishing materials only from inferior or even illegal ones. Sometimes they even suggest that our recordings do not come from Polish farms, but from China for example.The investigation carried out is unambiguous proof that the suffering of animals is not the result of individual negligence, but a universal problem of the cage system for rearing wild animals for fur” added Wiltowska.

Yevhen agreed to share his image and to openly spoke in front of the camera about his experiences in a film which is available on the organisation’s YouTube channel. The activist describes, among others, the dead minks he found every day in cages, and the "hospital", a pavilion for sick animals in which, however, they did not receive veterinary help, but only waited for a faster death by gassing or died untreated in agony.

We hope that the amendment to the Act on animal protection and the ban on fur farming will return on the political agenda as soon as possible says Paweł Rawicki, President of Otwarte Klatki.

“The Polish society does not want fur farming, and even the biggest players in the industry, despite loud assurances, are not able to guarantee appropriate conditions for the animals and prevent their suffering. We expect a reaction from politicians on this matter” added Rawicki.

Poland is the third largest fur producer in the world and the fur from farms like Góreczki is sold in markets all over the world. Representatives of Open Cages submitted a notice to the public prosecutor's office about the animal abuse at Góreczki.