Shocking new investigation in Italy: Cruelty and violence against pigs at Zema slaughterhouse 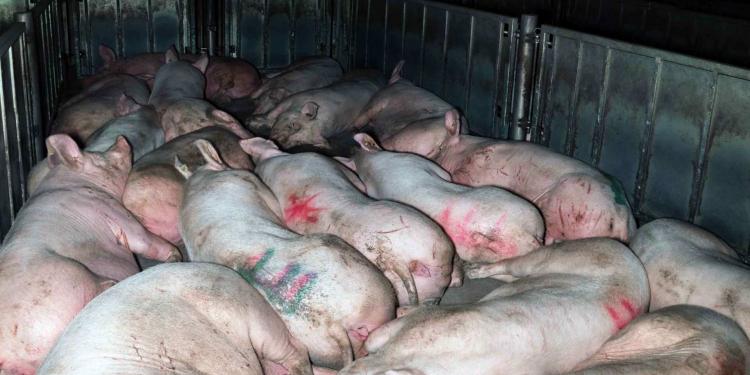 Shocking new investigation in Italy: Cruelty and violence against pigs at Zema slaughterhouse

The investigation shows acts of brutality committed on pigs inside an industrial slaughterhouse in Lombardy. The footage depicts mistreatments and systematic violations of the rules on animal welfare.

The slaughterhouse is owned by Zema S.R.L., a company in the province of Cremona that has been involved in the slaughtering and processing of pork since 1987, as well as one of the many Made in Italy labels.

Although the company promotes itself as mindful of animal welfare, the investigation carried out by Animal Equality at its facility shows a very different situation.

The footage shows many mistreatments of the animals, such as:

●      Animals slaughtered inadequately or while conscious

●      Multiple animals placed in stunning cages at the same time, in violation of animal welfare rules

●      Animals falling from trucks, pushed by the operators themselves, and an absence of ramps for unloading animals

●      Operator who repeatedly hits a pig in the head with an iron rod, throwing the animal against a wall and throwing the body of the dying animal over the fence

The analysis of these images by veterinarians and law experts in animal welfare demonstrates a lack of controls and compliance by the operators, at all stages of meat production (from the arrival of the animals to their death).

Although Animal Equality has already filed two complaints with the Prosecutor's Office and one for misleading advertising to the AGCM against Zema S.R.L. since April 2020, nothing seems to have changed and there has been no feedback from the authorities.

Our investigation has highlighted once again the mistreatment and brutality suffered by the animals involved in the agri-food chain together with the total lack of adequate controls and compliance with the animal welfare laws. We cannot accept that this situation remains unchanged and we will continue to fight so that animal rights are truly protected
Alice Trombetta, director of Animal Equality Italia

Starting from December 2017, Animal Equality has launched a petition addressed to the Ministry of Health and to the Ministry of Agriculture to put an end to a series of systematic cruelties that occur every day in Italian slaughterhouses. The campaign, supported by the findings of investigations conducted in Italian slaughterhouses, has surpassed 200,000 signatures from Italian citizens calling for tighter controls, the installation of surveillance systems such as CCTV, and the mandatory stunning of animals with no exception.

Beef production drives deforestation five times more than any other sector
Shocking documentary reveals the cruel reality behind the export of horse meat from Argentina
Commissioner Kyriakides welcomes new ‘Illegal Pet Trade: Game Over Report’
Eurogroup for Animals calls the European Commission to stop the production, import and use of eCG in the EU