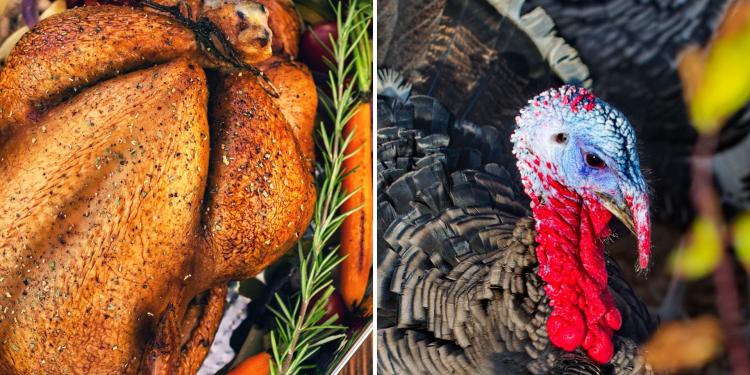 ‘It’s the most wonderful time of the year’… for some. While many of us look forward to the festive period, this calendar moment is unfortunately not so jolly for the birds flying under the EU’s radar in the poultry sector.

Though turkeys are the most slaughtered terrestrial farm animal in Europe after chickens and pigs, policymakers have so far not focused much on their welfare. In fact, turkeys are often painted as a positive source of meat by the media: applauded for being a ‘healthy’ and ‘sustainable’ choice, as well as being considered a Christmas dinner staple.

Another festive favourite, foie gras, is created at the expense of millions of geese and ducks each year - which, like turkeys, are all but ignored in the EU’s current animal legislation.

It’s time that these overlooked birds are given their fair share of the spotlight. Here’s why they need our help.

What do turkeys face in the lead up to Christmas?

As stated in our No Animal Left Behind report, over 240 million turkeys are farmed in the EU annually, with many of them suffering in intensive farming systems.

As very high stocking densities are often allowed in turkey factory farms, these poor birds tend to struggle with a lack of space and barren environment. Without natural light and adequate stimuli (like perches and hay bales) to inspire socialising, exercise and play, turkeys frequently become aggressive with each other, so their toes and beaks are cut when they are poults. Further, like broilers, turkeys have been bred to grow unnaturally quickly, leading to health problems like weaker hearts.

During the festive period, when turkeys are in high demand, these issues are generally amplified… especially in regions where they have little to no standards to protect them. Just this week, our member GAIA released footage showing turkeys in Flanders living in miserable conditions, mirroring their previous investigations into turkeys on Flemish factory farms in November 2021 and 2019.

Over the years, GAIA’s research has shown these turkeys:

GAIA’s findings reveal a pattern of mistreatment towards turkeys… one that must be stopped. Michel Vandenbosch, President of GAIA, comments “there must be concrete, strict and animal-oriented legal standards that effectively safeguard turkey welfare, otherwise, it would be better to close these turkey farms entirely”. Stronger regulations are the only way to ensure these poor creatures don’t face hell each holiday season (and the rest of the year, for that matter).

Christmas is generally a terrible time for ducks and geese, too

Around 40 million waterfowl are farmed for foie gras in the EU every year, the production of which can be extremely troubling behind the scenes.

While ducks evolved to live in water and socialise, those in factory farms are usually raised in small, restrictive cages, particularly towards the end of their lives when many of them are being force-fed: a process called ‘gavage’.

Gavage is brutal. Occurring up to three times a day, this excessive feeding can enlarge a bird’s liver by up to ten times its normal size, causing immense discomfort, lameness and injury. The feeding pipe used can also damage their oesophagus, as well as create great mental and emotional distress.

It’s a process that has rightly outraged animal organisations across Europe. In fact, our member Animal Equality has produced investigations everywhere from the UK to Germany and Spain to shine a light on the horrors of force-feeding, doing their part to secure a ban on the process wherever possible:

WARNING: Graphic content. A video by Animal Equality explaining the process of force-feeding for foie gras

While many countries across the continent have now thankfully banned force-feeding for the production of foie gras, Belgium, Bulgaria, France, Hungary and Spain have not. This is a situation both we at Eurogroup for Animals and our members are fighting to change - GAIA, for one, has been campaigning across social media for months to end the force-feeding of ducks in Wallonia, supported by compelling bodycam footage they secured while investigating foie gras farms in 2021.

With inhumane practices and depressing conditions perpetuating the poultry sector, it’s clear we need EU-wide action - taking the cruelty out of Christmas dinner and addressing the needs of the birds that have been largely forgotten by policymakers.

A great opportunity is coming. In 2023, the EU will revise its animal welfare legislation, creating a key moment to improve standards for turkeys, ducks and geese. We’d like to see them benefit from the same laws we’re campaigning for for all farm animals, which include:

Change is already afoot. Across the EU, agriculture ministers have called for minimum standards to protect turkeys. People have also shown an interest in changing the nature of foie gras production, with a 2018 survey in France (one of the countries that still allows force-feeding in the sector) indicating that over half the public were in favour of a ban on force-feeding ducks and geese.

Will you champion better animal welfare this Christmas?

As we prepare to campaign for change for all farm animals in the new animal welfare legislation, there are things you can do right now to support turkeys, ducks and geese this Christmas (and beyond)!

It’s the season of giving… so let’s give these animals a life worth living!

Celebrate strong animal welfare standards at home and beyond this Christmas, and help us and our members to change the very foundation of what farming with animals looks like.