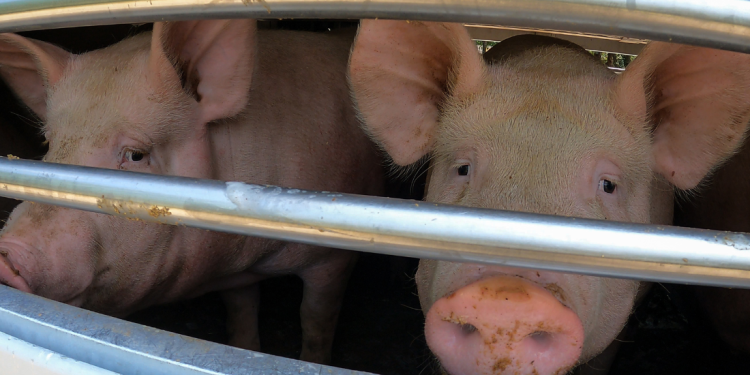 Roadside checks by Essere Animali investigators document trucks parked in the sun with pigs inside, gasping, visibly out of breath. These are dramatic scenes, but they do not constitute any violation of law, thanks to "an absolutely inadequate EU regulatory system in terms of concretely protecting animals" the organisation states.

Bologna, 21 June 2022 – In these days of extreme heat, the organisation Essere Animali carried out monitoring activities along the A1 motorway, between Lodi and Bologna, to document the conditions of the animals transported for food production.

The organisation's investigators monitored trucks used for the transport of live animals, intercepting them en route and following them until they arrived at the slaughterhouse. The temperatures were detected through the use of a heat gun, with which it was possible to ascertain the exact temperature inside the compartment of the truck in which the animals were transported.

We have documented trucks that travelled with external temperatures of 36°-38°C and that, upon arrival at the slaughterhouse, stopped for 30 minutes in the sun before unloading the animals. In these cases, it was possible to verify that the pigs were forced to remain in the truck with internal temperatures above 40°C. Unfortunately, the current regulations do not provide for temperature limits inside or outside the vehicle for journeys with a duration equal to or less than 8 hours, merely requiring that the means of transport should be able to protect animals from 'extreme temperatures', and prohibiting them from being transported in conditions that expose them to 'unnecessary injury or suffering'. The lack of objective parameters of reference therefore creates a vast unregulated grey area, which does not facilitate appropriate intervention when the welfare of the animals is not respected.
President of Essere Animali, Simone Montuschi

Regulation (EC) No. 1/2005 on the protection of animals during transport does not place any limit on journeys that last up to 8 hours (or 12 hours if an exemption is granted) with regards to either the temperature inside or outside the vehicle, or the possibility of accessing water; provisions are only in place for long journeys of more than 8-12 hours. In this case, it is specified that the ventilation systems on the means of transport must be designed, constructed, and maintained in such a way that, at any moment in the journey, regardless of whether the means of transport is stationary or in transit, they can maintain a temperature between 5°C and 30°C inside the vehicle, with a tolerance range of +/- 5°C depending on the external temperature.

In a note issued at the beginning of June addressed to the Direction of the Traffic Police and to the trade associations of lorry drivers and veterinarians, the Ministry of Health requires that the transport of live animals must not be carried out with atmospheric temperatures above 30 degrees at the start of or during the journey. However, the reality documented by the investigators of Essere Animali shows that these provisions are not effective in practice, and there is an urgent need for greater legislative protection during transport operations.

If we allow transport for several hours when the outside temperature touches or exceeds 30°C, the pigs inside the trucks, due to crowding and the body heat produced, will be forced to withstand temperatures around 40°C. But the scientific literature indicates that for adult pigs, the thermoneutral zone - that is the range of temperatures within which the animal is able to maintain its normal body temperature - is approximately between 8°C and 25°C. The animals transported in these days of high temperatures were therefore subjected to stress and suffering.
Simone Montuschi adds.

Essere Animali believes that new European laws are needed as soon as possible to better protect animals, as the current ones are too generic, and do not take into account various species-specific requirements and with serious shortcomings, such as the lack of regulatory protection for animals during trips lasting up to 8 hours.

Through the Farm to Fork strategy, the European Commission has set itself the goal of carrying out a complete review of the legislation on animal welfare, including transport and slaughter of animals raised for food, by autumn 2023.

Through the No Animal Left Behind campaign, coordinated by Eurogroup for Animals and supported by dozens of NGOs from all over Europe, Essere Animali calls for the transport of live animals over long distances (longer than 8 hours) to be prohibited. Furthermore, they request the introduction of a range of acceptable external temperatures between 5°C and 25°C, outside of which any transport is prohibited. Finally, fundamental parameters must be clearly defined, such as species-specific and categories-specific conditions for the suitability for transporting animals, as well as the availability of space and method for water administration.

Allowing the transport of live animals when the measured external temperature is 30°C or more, and not providing access to water, is equivalent to not guaranteeing the welfare of the animals. It is clear that the current European laws for the protection of animals are incomplete and inadequate, so we ask the European Union and the Italian government to align the new legislative proposal with current scientific and ethological knowledge.
Simone Montuschi concludes.

The transport conditions documented by Essere Animali are disturbing, and bring to light a reality completely ignored in Italy. A country which, not by chance, was not among the thirteen member states that — on the occasion of the Agrifish Council, among the Ministers of Agriculture and Fisheries on 18 July — came out in favour of an ambitious revision of the regulation on the transport of live animals, which is planned to be presented by the European Commission in 2023. The deafening silence of Minister Patuanelli on such an important issue as animal welfare is unacceptable. Italy once again shows total indifference towards this issue and, on the contrary, unconditional support for a food system based on profit at all costs, as well as on intensive and industrial farming practices that not only exploit other sentient beings as if they were commodities, but also destroy forests, pollute soil and water, increase greenhouse gas emissions, and bankrupt small farmers. This is an unsustainable model for the entire planet, so it is urgent to reverse course without wasting any more precious time.
Eleonora Evi MEP, member of the Committee of Inquiry on the Protection of Animals during Transport (ANIT)