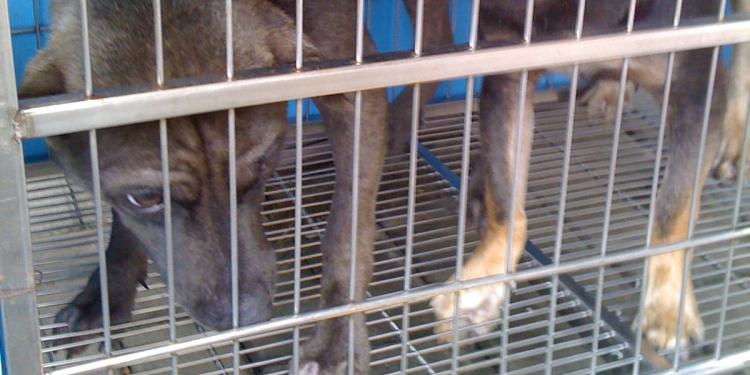 For the last six months, FOUR PAWS has been working with the owners of a dog slaughterhouse in Kampong Thom Province, Cambodia to not only shut it down, but also provide the owners with an alternative livelihood to ensure they never return to the trade again. Most people involved in the dog meat trade do not want to be in the industry, but often feel forced into it out of economic necessity. During their meetings, the owners repeatedly thanked FOUR PAWS for the opportunity. During one particularly emotional meeting, the owner expressed that no one had ever provided her and her family with help before to get out of the dog meat trade, and she is forever grateful to never have to kill dogs again.

Hours away in the capital city of Phnom Penh, FOUR PAWS team has been busy preparing the supplies and kennels needed for the rescue mission. Minivans were put on standby to not only transport all of the dogs to safety, but also remove the rusty holding cages to ensure that they will never hold another dog for slaughter again.

Unfortunately, as rescue mission planning was taking place, Cyclone Sinlaku was barreling through Southeast Asia, bringing torrential rainfall and gusty winds. Nevertheless, on 2 August FOUR PAWS team made the long, muddy trek to the dog slaughterhouse to make final arrangements for the rescue.

During the visit FOUR PAWS team found many scared and hungry dogs packed into two rusty, heavy metal cages awaiting slaughter. The cages were literally sinking into the mud below with the weight of the dogs on top. Most dogs were scared, trembling, trying their best to hide underneath the rest. Others were panting, too exhausted to move, and just trying to survive. You can see the fear in their eyes whenever a person would walk past their cage. There was a strong putrid stench from the combination of feces, urine, and heat. All of the dogs had originated from Siem Reap Province, they survived a tortuous drive on the back of a motorbike taking more than four hours to the slaughterhouse. Most dogs had been obviously stolen, many have wounds and cuts. FOUR PAWS team tried to comfort them the best they could, and provided them with food and water.