Protest at Canadian embassy against opening of seal hunting season 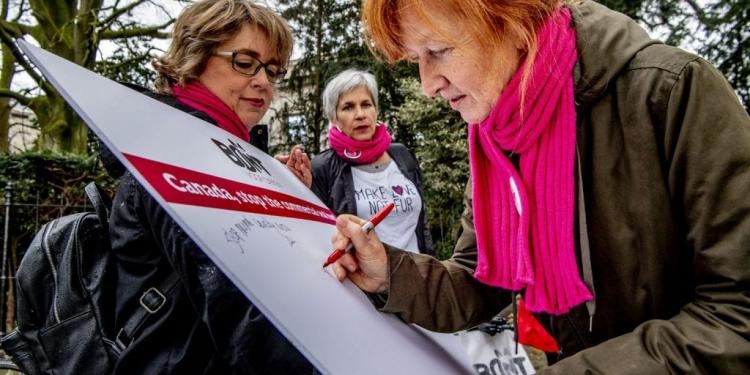 Protest at Canadian embassy against opening of seal hunting season

News
Fur for Animals today stood with a group of supporters in front of the Canadian embassy in The Hague to draw attention to the terrible Canadian seal hunt that can start again at any moment.

During the playful action, the participants held up meters-large double-printed plates with photos. The signs on both sides formed a beautiful visual puzzle effect with a powerful message.

Director of Fur for Animals, Natalie Wanga was received at the embassy for an interview with ambassador Sabine Nölke. During the interview, she urged Sabine Nölke that the seal hunt is very animal-unfriendly and pointless. The ambassador stated that the regions of Canada where the hunt is taking place are very poor and the hunters cannot afford the income. Wanga has indicated that various reports from recognized Canadian animal welfare organizations together with various Canadian politicians show that the hunters themselves prefer to be bought out due to the low income and the dangers of hunting. Currently, the government spends much more tax money on subsidies to maintain the hunt than it does. The same reports and politicians also indicate that the subsidies would rather be spent on sustainable job alternatives.