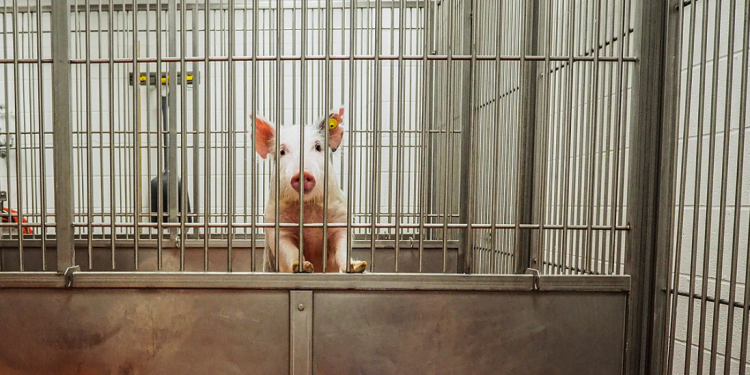 Proefdiervrij launched a campaign and petition calling for non-animal science solutions to the human organ shortage.

There is an ongoing chronic shortage of suitable human organs for life-saving transplantation. Animal to human transplantation, known as xenotransplantation, has been heralded as the solution to save patients’ lives. Earlier this year, a US man became the world’s first person to get a heart transplant from a genetically modified pig. Unfortunately, the patient died two months after the transplant.

Proefdiervrij are countering this movement to regard animals as spare parts for humans with their online campaign Niet. Gewoon. (Not. Normal.). The foundation that strives for a future without animal testing thinks it is not normal to make animals suffer for the sake of people and wants to make people think more about this controversial subject.

Proefdiervrij wants to move away from outdated methods that cause pain suffering and distress to animals and is focused on human-oriented methods to solve the donor shortage, including a growing investment in disease prevention, the improvement of the still ineffective system of organs donations, and on furthering the technologies that are already providing solutions for some transplantation needs.

For example, at the end of 2021, researchers at UMC Utrecht implanted a complete artificial heart for the first time in the Netherlands. The outside of the heart is made of plastic and the inside is lined with biological material. At the time of this transplant, this was still animal material, but in the future this could hopefully also be human tissue.

Culturing human organoids is also a step towards cultivating organs. Researchers in America have already developed a 3D biological structure for organs that will hopefully one day allow us to grow fully functional human organs in the lab.

In the Netherlands, animal organ transplantation is prohibited.

And it should stay that way. Using animals to solve human problems is a step back in time and we want to prevent donor animals from becoming the new generation of laboratory animals.
Debby Weijers, director of Stichting Proefdiervrij