No Animal Left Behind: Why no animal should be considered a machine 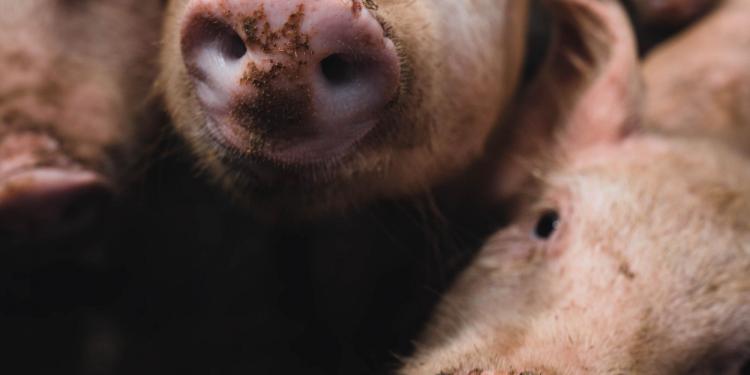 No Animal Left Behind: Why no animal should be considered a machine

News
Every animal deserves to enjoy life. No animal is a machine, without feelings or curiosity or needs. But billions are treated as ‘units of production’ and squeezed and stacked together like batteries being charged. They should be cared for as the sentient, smart, pleasure-seeking creatures they truly are, and given every chance to enjoy their lives. They deserve living spaces that add pleasure and interest and choice to the everyday, that feed curious minds, and encourage connections and wellbeing.

As part of our campaign ‘No Animal Left Behind’, we release the fifth demand today which focuses on positive mental experiences:

Grower or fattening pigs are pigs who are reared for meat. Sadly, many grower pigs are kept in overcrowded, barren pens on uncomfortable flooring with little to no enrichment. Pigs are highly intelligent and emotional animals, and so when they are kept in these unsuitable conditions they quickly become stressed and frustrated. As a result, they fight and bite one another, and they can cause severe injuries, particularly to each other’s tails. Rather than tackling the root of the problem, farmers will often remove piglet’s tails, and clip their teeth. These procedures are extremely painful and stressful, for the pigs, and can cause long-term issues.

This is no life for pigs. Pigs need space to explore, substrate to root around in, and stable social groups of peers with whom they can play and interact with. Pigs are playful animals and enjoy spending time with others. When they are given the space to be themselves and relax, young pigs will often chase and run around with one another, having fun. This is a stark contrast to how most of Europe’s pigs are raised; in barren, dirty, and overcrowded pens, with nowhere to escape aggressive and bored peers. Pigs deserve more.

Dairy cows are increasingly being kept indoors for their entire lives. Some cows around Europe may even be tethered in one spot, preventing them from moving around and exercising freely. Cows are sentient animals. This means that they feel pain and joy. They have evolved to live on pasture, and grazing is an important behaviour for them. In some farms, where cows are kept in only for the winter, cows will literally leap for joy when they are released back onto pasture in the spring. Scientists have even found that cows will push increasingly weighted gates just to get access to pasture.

Cows enjoy being outside, and they find being stuck indoors on hard floors with little to do, frustrating and boring. Cows need space to roam and grass to graze. Cows belong outside.

2021 brings a once in a lifetime opportunity. We have until September to persuade the European Commission to undertake a complete review of ALL legislation that affects farmed animals in Europe. Farmed animal welfare laws must do more than protect every animal from neglect and cruelty, and minimise their suffering; they should actively promote a positive state of health and wellbeing.

You can add your voice to the over 130,000 voices here to help us reach enough supporters to be heard by the European Commission before 4 October 2021.