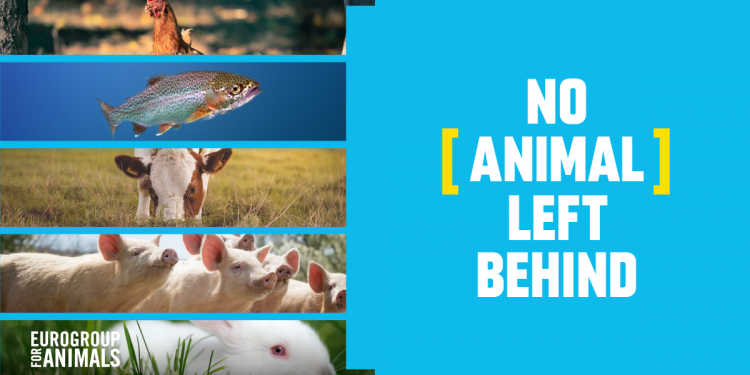 News
On the occasion of World Animal Day 2021 Eurogroup for Animals released a new report demonstrating how the current EU laws are failing animals, as well as a white paper outlining what the association wants to see in new legislation.

A groundswell of evidence fed into the report, proving that the EU laws for farmed animals are failing to meet the animals needs: laying hens, broiler chickens, sows, dairy cows, along with other “forgotten species” such as rabbits, ducks, geese and quails, are all reared, transported and slaughtered in ways not fit to provide them with a decent life.

The reports were launched at an event with key speakers from the European institutions, including a presentation from Maria Noichl MEP, a video message from Carola Schouten, Minister of Agriculture and Deputy Prime Minister of the Netherlands, and with an intervention of Lucie Carrouée, the Deputy Head of the Animal Welfare and Antimicrobial Resistance Unit of DG Sante.

The European Commission is soon going to open a public consultation on the Fitness Check, a process to assess the effectiveness of the current animal welfare laws, comparing them to prevailing scientific standards and evaluating their impact on the ground.

In the past months Eurogroup for Animals, with the help of its eighty one members, has been working to gather information on the gaps that leave millions of animals unprotected and to raise awareness on the process through a pan European campaign.

This research led to the creation of two key publications: the No Animal Left Behind report which highlights key examples of where the current EU Directives are failing farmed animals (General Farming, Broilers, Pigs, and Laying Hens), and the white paper No Animal Left Behind: The need for a new Kept Animals Regulation, where we offer a solution for the inadequacies detailed in the report.

The European Union’s animals deserve more than this: a good life, whether they are farmed animals or pets, they deserve the opportunity to engage in positive experiences that make them feel good.

Moreover, there is increasing concern over animal welfare in all areas of society and good animal welfare practices also have wider benefits for the environment, public health, the economy, and contribute to sustainability goals.

The European animal welfare acquis needs a serious and profound revision. Ahead of this revision, some farmers are already going beyond the minimum EU animal welfare standards, demonstrating that higher animal welfare rearing can be economically viable as well as done in a sustainable way. During the event we had the opportunity to engage directly with the farmers portrayed in the case studies.

“The current EU animal welfare legislation is not fit for purpose. It is failing to meet the needs of animals kept or used for commercial purposes, and is no longer in line with scientific research. The EU legislation urgently needs to be reformed to ensure it considers all farmed species and all aspects of their welfare: health, nutrition, environment, behaviour, and mental states”, commented Roberto Bennati, LAV General Director who presented during the event.

“Ensuring that standards meet, as a minimum, the five domains model, would mark a bold, qualitative step forward in terms of the legal protections afforded to all animal species that are farmed for commercial use. That’s why we’re calling for an ambitious state-of-the art new Kept Animals Regulation” added Reineke Hameleers, CEO, Eurogroup for Animals.

The European Commission has an opportunity to deliver, in line with its ambitions contained in the Farm to Fork strategy, a future-proofed legal foundation for evidence-based standards that provide the ability for all the animals to experience a positively affected mental state, thereby enabling them to lead lives that are truly worth living.

“Any farming practices that cannot meet such requirements should, in effect, be eliminated. In doing so, Europe would remain a world leader in animal welfare standards, citizens' expectations would be met, and no animal would be left behind”, concluded Hameleers.

Both papers use the Five Domains model, an assessment tool applied around the world for welfare, and more recently as a framework for legislative welfare codes. This is a paradigm shift from the Five Freedoms model, which relies on the elimination of negative experiences and, in an anthropocentric way, only provides freedom from (hunger and thirst, discomfort, pain, injury or disease, fear and distress, or constraints allowing the expression of natural behaviour) to a degree that humans find acceptable, while animals continue to suffer.

Instead, according to the Five Domains model an animal’s welfare is the balance between positive and negative experiences and feelings, and this mental state is the direct result of the animal’s health, environment, nutrition, and behavioural interactions, and whether the animal is given appropriate opportunities to fulfil their wants and needs. These may include environment-focused exploration, food acquisition activities, as well as animal-to-animal interaction, all of which can generate various forms of comfort, pleasure, interest, confidence and a sense of control.