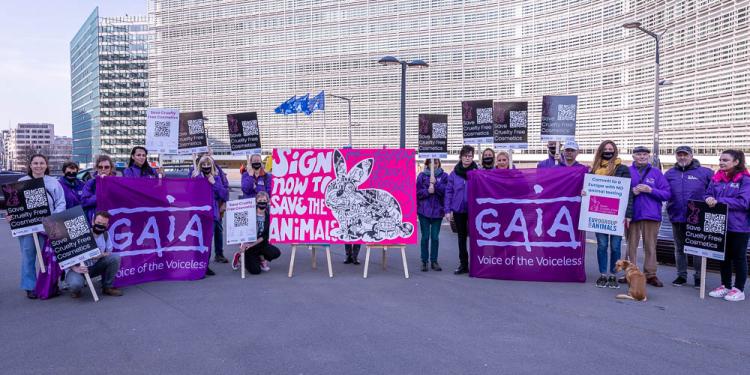 On the ninth anniversary of the EU law preventing the sale of all cosmetics products tested on animals, animal protection NGOs Cruelty Free Europe, Eurogroup for Animals and GAIA will not be celebrating, as chemicals rules look set to render the bans meaningless.

Yesterday, the organisations held a vigil for the cosmetics animal testing bans close to the headquarters of both the European Commission and Council in Brussels. They were joined by the French street artist Ckeja, who painted live throughout the vigil.

Despite huge public support for the bans[1], cruel animal tests are now being required by European authorities, including on ingredients used solely in cosmetics. Proposals to extend the scope of chemical safety legislation under the Chemicals Strategy for Sustainability look set to massively increase the amount of regulatory animal testing taking place in Europe, including tests for cosmetics’ ingredients, namely make-up, shampoo, moisturiser, soap, perfume and toothpaste.

A study carried out in 2021 by the European Centre for Alternatives to Animal Testing found that 63 chemical safety assessment dossiers in the EU’s chemicals database had used the results of new animal testing for cosmetics risk assessment, with this number looking set to increase as the European Chemicals Agency carries out more reviews. This is testing that has taken place since the bans[2] came into place.

Europe’s leaders often trumpet how brilliant the EU’s cosmetics animal testing bans are – and how they were ground-breaking and a model for the world. However, we know that more and more animal testing is being required by regulators for ingredients in cosmetics, against the wishes of European consumers and cosmetics brands. But we can all stand up and say that we want our bans back and we want them strengthened by signing the Save Cruelty Free Cosmetics European Citizens’ Initiative at savecrueltyfree.eu. We have the power!
Kerry Postlewhite, Director of Public Affairs, Cruelty Free Europe

Non-animal approaches to ensure the safety of cosmetics and other consumer products have been routinely used in the EU for decades. There is no reason to test ingredients on animals when advanced non-animal assessment strategies are available and offer reliable alternatives to animal testing. With this ECI, we call on the European Commission to commit to actions that can ensure the protection of human health and the environment by managing chemicals without the use of animals, and to invest in human-based, non-animal approaches for regulatory decision-making.
Reineke Hameleers, CEO, Eurogroup for Animals

The 2013 EU trade ban on cosmetics tested on animals is in danger. It would be a real shame if the clock would be turned back.
Ann De Greef, CEO, GAIA

[1] 74% of adults in EU Member States agree that animal testing for cosmetic products and their ingredients is unacceptable in all circumstances,  Savanta ComRes survey for Cruelty Free Europe, July 2020.

Video and photos of the Brussels event on Thursday 10 March are available here. Interviews are also available on request.

Cruelty Free Europe is a Brussels-based network of animal protection groups working to bring animal testing to an end across Europe. With 19 associate members, we act as a force for animals in laboratories across the EU and the wider European neighbourhood. Working with elected Members of the European Parliament, governments, regulators, officials and supporters, our experts coordinate efforts to secure change for the animals currently suffering in experiments in Europe. We believe there is no rational moral justification for using animals in experiments. Instead, we champion progressive, humane scientific research and cruelty free living.