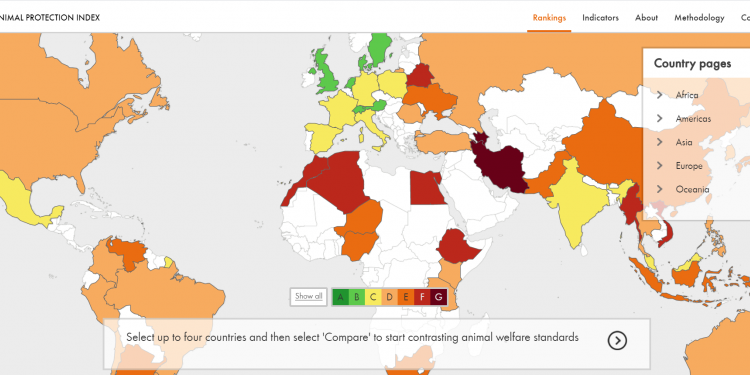 New research into the animal welfare policies and legislation of 50 countries could be a vital tool in assessing animal welfare standards in the EU’s trade negotiations.

Poor animal welfare practices could increase the risk of disease outbreaks according to the second edition of the Animal Protection Index (API). As animal welfare gains increasing prominence in the EU’s trade negotiations, the API shows that some countries are still missing the basic legal framework needed to protect animals. Also, many countries do not formally recognise animal sentience in their existing legislation.

Trade negotiations, which began on 2nd March between the European Union and the United Kingdom, focused strongly on the “level playing field” for standards and regulation between the UK and the EU.

Watch the video explaining what the Animal Protection Index is and check the interactive website where you can explore countries in detail and compare policy and legislation around the world.

Good animal welfare practices helps prevent disease and the recent outbreak of coronavirus proves that. By keeping animals clean, healthy, and providing sufficient space for them to exhibit natural behavior will ultimately combat the threat of zoonotic diseases.

It is important that trade negotiators recognise animal welfare as a vital part of trade negotiations and the Animal Protection Index can guide governments to make the right decisions... Recent global developments have proved that high animal welfare standards are vital to protect public health, the environment and animals.