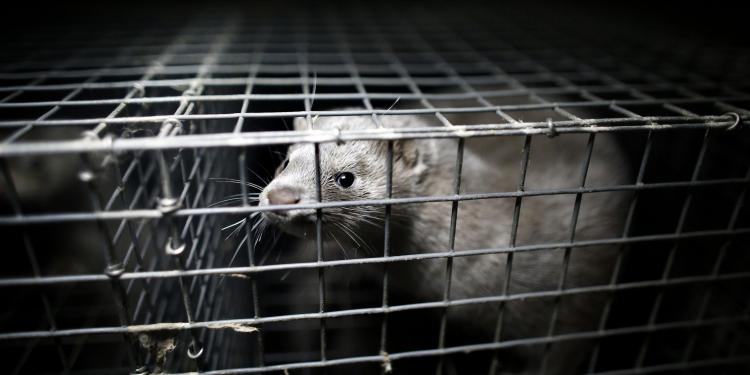 News
On the cusp of the mink breeding season, which is set to resume at the end of this month, the European Food Safety Agency has released a report finding that all mink farms should be considered at risk for COVID-19 outbreaks and must be strictly monitored. Following the release of this report, animal protection groups FOUR PAWS, Humane Society International/Europe, Eurogroup for Animals and Fur Free Alliance - and their member organisations – have issued a strong call urging the European Commission to instruct Member States to immediately suspend mink production.

“The only way to keep EU citizens safe is to immediately suspend mink production in the Member States where this cruel practice is still legal before the breeding season starts,” said Joh Vinding, Chair of the Fur Free Alliance. “If this does not happen, the current mink population will increase five-fold by May. Even though only the breeding animals are present right now, there have still been COVID-19 outbreaks on mink farms in Spain and Poland. If the mink population is allowed to grow and all the cages on the fur farms are filled, the risk of disease transmission will likely also increase. The past year has shown that, irrespective of all monitoring and biosecurity protocols taken, the SARS-CoV-2 virus can spread uncontrollably amongst mink populations. At the time of this global health crisis, such risks need to be eliminated entirely.”

The EFSA report notes that in regions with a high density of fur farms, the SARS-CoV-2 virus is likely to spread from one mink farm to the next. EFSA recommends that Member States not only implement passive, but also active monitoring systems. They advise that measures should include frequently testing all people who come into contact with mink, testing samples from dead or sick animals, testing of wild mustelids captured near fur farms and genetic sequencing analysis for tracing the origins of outbreaks and identifying possible viral mutations.

“Implementing such measures is extremely costly and will largely be financed by taxpayers’ money, despite the fact that the majority of EU citizens oppose the practice of fur farming” said Pierre Sultana, Director of Four Paws European Policy Office. “We know, for example, that just for one single farm, the Italian authorities spent a total of €50,000 between August and November 2020 to implement biosecurity measures. Regardless of the expense, one thing is patently clear: biosecurity and monitoring measures have their limitations and are not as effective as were originally believed. While they can help to detect outbreaks early on, they cannot entirely prevent mink from becoming infected. This is why we, as animal protection NGOs, have united in our call to immediately suspend all mink production in the EU.”

“The necessity of halting mink production has become even more urgent following the recent discovery of the  so-called ‘Cluster 5’ mutation of SARS-CoV-2 in German patients,” said Dr Joanna Swabe, Senior Director of Public Affairs for Humane Society International/Europe. “This dangerous mutation of the virus that originated in Danish mink was believed to have been eradicated after the mass culling of Denmark’s entire mink herd last year. However, these recent cases suggest that the authorities were not entirely successful in eradicating this dangerous viral mutation, which could potentially undermine the efficacy of COVID-19 vaccines in humans. We applaud Sweden for already taking action to ban mink breeding in 2021. Reportedly Belgian fur farmers have also voluntarily taken a decision to suspend breeding due to the risks associated with COVID-19. It is vital that the remaining Member States that still permit fur production follow their example.”

“The demand to suspend mink production is supported by a statement signed by numerous scientists from the fields of virology, infectious diseases, clinical microbiology, veterinary medicine and environmental health, which confirms the serious threat that fur farming poses to human health,” said Reineke Hameleers, CEO of Eurogroup for Animals. “It calls for the immediate suspension of mink farming as an appropriate, precautionary and proportionate measure based on public health concerns. The experts behind this statement, as well as EFSA, point out that due to the confined living conditions of animals in fur farms, once the virus has been introduced, it is almost impossible to stop transmission. The high number of individuals living in close proximity also provide ideal conditions for virus mutations to occur, as seen in Denmark. New variants may not respond to the vaccines that are currently available and could cause significant setbacks in Europe’s efforts to battle the virus.”

Notwithstanding our unwavering position that fur farming should be permanently banned across the EU due to unacceptable animal welfare outcomes and future potential public health risks, in the interim, we are calling on the European Commission to act immediately to suspend mink farming, the breeding of mink, and the import and export of live mink and their raw pelts, across the European Union.