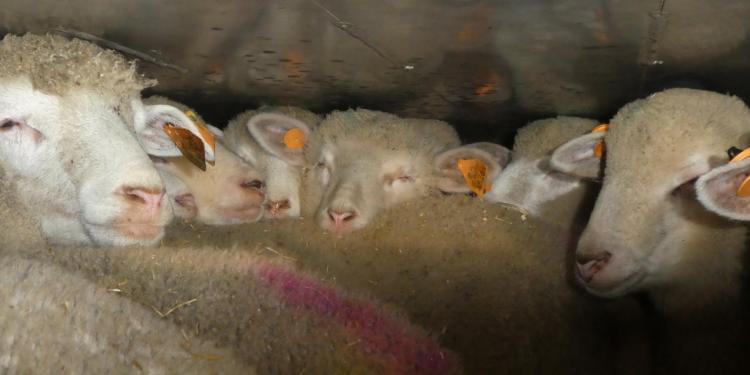 The transport of lambs for Easter continues this year, three trucks from Poland and Romania identified in illegal conditions, stopped by the police and sanctioned

New images collected by the investigators of Animal Welfare Foundation (AWF) and the Zoophile Guards of ENPA, and released in collaboration with Animal Equality, show once again the transport of live animals drama, in particular for lambs on the holidays occasion.

In the last few days, close to the Easter period, AWF and ENPA, in collaboration with Animal Equality, have followed three trucks coming from Poland and Romania carrying thousands of lambs between two to four months old.

Three Members of the European Parliament joined the investigations: Tilly Metz, Caroline Roose and Thomas Waitz, also members of the Parliamentary Committee of Inquiry on the Protection of Animals during Transport (ANIT), went to Italy to verify the real problems these animals face during transport.

One of the trucks coming from Poland was stopped by the police and the driver was fined over 1,300 € for poor transport conditions, while another driver admitted that he did not provide the animals with water for the all duration of the trip.

All three trucks traveled over distances up to 1,700 km, reaching almost 30 hours of travel in terrible conditions, without providing adequate care for the animals.

The trucks were directed to the ILCO slaughterhouse in Acquapendente, Palo del Colle, and to the town of Badia Tedalda, in the province of Arezzo, Tuscany.

Every year in Italy more than 2 million lambs are slaughtered, of which 300,000 during the Easter period. To date, most of them are imported on the routes of Eastern Europe, thus involving a journey full of suffering for these young animals in inadequate transporters, built for other species. Very often unweaned animals are loaded.

“This is not the first time we denounce a similar situation, quite the contrary. We have been monitoring this travel route for several years now: it entails enormous suffering for the lambs”, the associations declare.

“As recommended by scientific bodies and researchers, these animals should not be transported for welfare and health reasons. Additionally, the fact that neither sanctions nor NGOs’ official complaints to the relevant Member States and to the European Commission have led to significant improvements, shows that there is a general problem with the implementation and enforcement of Regulation (EC) No 1/2005. We hope the upcoming revision of this Regulation will put an end to these transports", they conclude.

The Animal Welfare Foundation e.V. is an independent, non-profit, and internationally active animal welfare organisation. With our own investigation teams and animal welfare projects, we are committed to improving the lives of so-called farm animals.

Animal Equality is an international organisation working with society, governments, and companies to end cruelty to farmed animals. Our teams in the United States, Germany, Italy, Spain, the United Kingdom, Mexico, Brazil, and India consist of highly qualified professionals with years of experience in undercover investigations, corporate campaigns, legal advocacy, and the development of large-scale education programs. Using these values to launch innovative projects and strategic campaigns, we work to expose and abolish the cruel practices of the animal agriculture industry.

Twelve Member States demand to end fur farming in the EU
Eurogroup for Animals calls the European Commission to stop the production, import and use of eCG in the EU
Staggering mortality rates reveal significant health and welfare challenges in Norwegian fish farming
Beef production drives deforestation five times more than any other sector