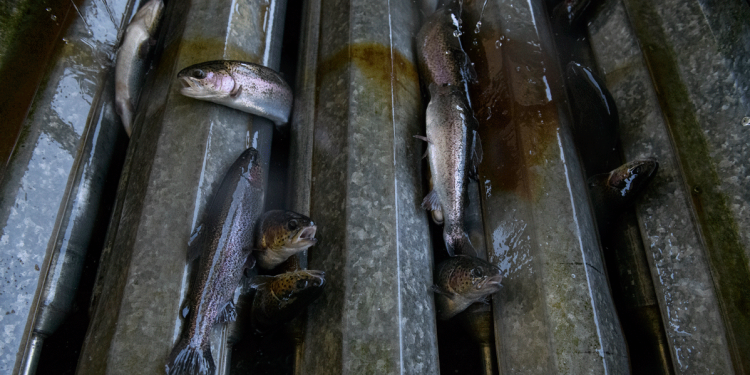 Critical farming conditions, problematic transport operations and painful slaughter methods: the gaps in the EU fish welfare legislation are exposed in a disturbing new investigation of fish farms in Europe.

A new investigation by the organisation Essere Animali and released in collaboration with Compassion in World Farming reveals the shortcomings of the current European Union (EU) legislation on animal welfare, which clearly fails to guarantee the protection of farmed fish. The shocking images filmed during the investigation — which was conducted at several trout farms as well as a few sea bass and sea bream farms — reveal farming, transport and slaughter practices that cause enormous suffering to the animals, as they are poorly regulated by specific EU regulations.

In Europe, fish are amongst the animals raised in the greatest number: in 2017 alone, it is estimated that 1.3  billion fish were killed for human consumption within the EU borders. However, unlike for land animals, the current EU legislation for farmed fish sets only some generic requirements, formulated in such a way as to make the few provisions on animal welfare difficult to apply in the different farming stages (Directive 98/58 /EC), during transport (Regulation (EC) No. 1/2005) and at the time of slaughter (Regulation (EC) No. 1099/2009).

Essere Animali's investigation shines a spotlight on the cruel conditions of many of Europe's intensive fish farms. Crammed into concrete tanks; the high stocking density can compromise the water quality, allowing pathogens and diseases to spread quickly. The overcrowded tanks can also lead to fish becoming increasingly stressed and aggressive with each other. The images show dead fish floating on the water surface, indicative of the  industry's high mortality rates. The barren and overcrowded conditions of the facilities again show the lack of  stimulation farmed fish are given - unable to satisfy many of their natural, behavioural needs, they are instead forced to swim in endless circles.

Furthermore, the investigation shows how transport represents one of the most critical phases in which farmed fish welfare is seriously endangered. Before being transported, fishes commonly undergo prolonged periods of  fasting that can last up to several days, causing stress to the animals. Loading and unloading operations can occur carelessly, and without the use of suitable equipment, fishes can be left out of water for several minutes. Poorly designed pumps and nets and careless handling cause physical injuries to the fishes as well as acute  emotional suffering.

The images documenting the killing of animals are a testimony not only of the failure to implement EU legislation  but also of its obvious shortcomings in terms of specific requirements that protect fish welfare at the time of  slaughter. Regulation (EC) no. 1099/2009 provides that, at the time of killing, animals must be spared 'avoidable  pain, anxiety or suffering' (Article 3, paragraph 1). However, the absence of further specific rules on the most  appropriate stunning and slaughter methods for different finfish species results in the widespread use of cruel  and painful practices. The investigation shows fishes agonising after the ineffective electrical stunning applied either in ice slurry or out of water in wooden and marble containers: the loss of consciousness is not immediate, as shown by the vigorous escape attempts made by the animals. This is further proven by the presence of  conscious fishes during the packaging operations in the processing plant.

The serious animal welfare issues documented in the investigation show the urgent need for greater protection  of farmed fish across Europe. Fish are farmed in higher numbers than any other animal, but they also are the most neglected animals by EU legislation. We now have a unique opportunity to ask the European Commission to end their suffering and defend  the lives of over a billion fish every year, through a significant improvement in EU legislation that ensures adequate protection of their welfare at every stage of farming.
Dr Krzysztof Wojtas, Head of Fish Policy at Compassion in World Farming

The European Commission is currently revising the EU legislation on animal welfare, in line with the provisions  of the Farm to Fork strategy, and will present a new legislative proposal in the autumn of 2023. The need to include fish welfare in the review is even more compelling given that specific recommendations on both farming practices (water quality and handling) and transport practices have already been developed and published,  respectively, by the EU platform on animal welfare and by a team of researchers at the request of the  Commission of Inquiry on the Protection of Animals during Transport (ANIT).

By releasing this new investigation, Essere Animali joins and relaunches the Compassion in World Farming campaign, aimed at asking the European Commission, specifically the Directorate General for Health and Food Safety (DG SANTE), to include the protection of fish welfare among the priority objectives of the revision of the EU legislation on animal welfare. The initiative is supported by a petition aimed at showing European Commission officials how much citizens care about fishes and their welfare during farming.

Fishes are sentient beings with incredible cognitive abilities, capable of experiencing not only negative emotions such as pain, fear and suffering but also positive emotions such as joy and pleasure originating from positive interactions between conspecifics and with the surrounding environment. The European Commission has the important opportunity to ensure better regulatory  protection, also thanks to the evidence provided by scientific research which has allowed the identification of more humane farming practices. The time has come to listen to the voice of sensitive citizens calling for the elimination of the silent suffering of fishes on European fish farms.
Simone Montuschi, President  of Essere Animali