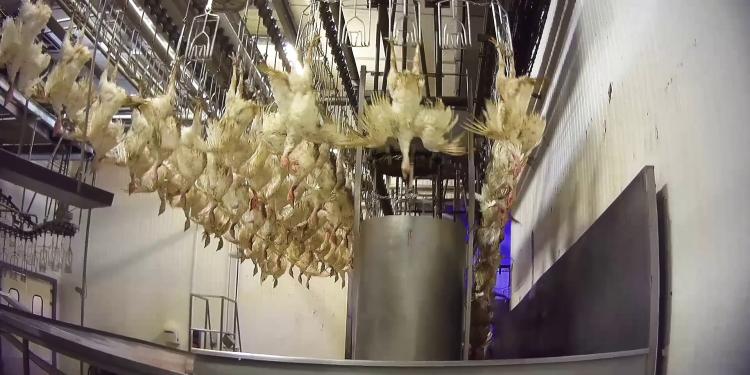 News
Today, Eurogroup for Animals' member L214 reveals the immense suffering endured by turkeys at a slaughterhouse in Blancafort, Cher in France. Every day, 15,000 turkeys are killed in this slaughterhouse, which flagrantly violates the regulations governing the killing of animals.

The investigation which was initiated thanks to a whistleblower working at the facility, shows that as soon as the turkeys arrive at the slaughterhouse, they are hung upside down with their legs stuck on hooks. This causes acute pain to these birds, which can weigh up to 15 kg. The turkeys are forced to hold their heads up in order to not to scrape the ground. The chain they are hung on goes on for more than 50 metres, making these animals being suspended conscious for more than 2 minutes. These are two flagrant violations of the regulations.

"A life of suffering, from their first to their last day" - L214 makes a case against the poor rearing and transport conditions of the turkeys:

Before arriving to the slaughterhouse in Blancafort, the turkeys are raised in huge buildings, piled on top of each other and fertilized for 3 to 4 months. In these intensive farms, there are on average 8 turkeys per square metre, often plucked or injured. They will never walk on grass, but wade through the excrement that accumulates over the weeks.

During the transport, L214 reports that they are piled up in crates that are far too small. Their heads touch the ceiling, which does not allow for good ventilation and can cause heat stress for the turkeys as they struggle to breathe and lower their body temperature. Some turkeys get their heads stuck when they are unloaded from trucks, and the slaughterhouse bins are filled with the bodies of those that did not survive the transport.

In view of the flagrant violations of the regulations, L214 reported to have filed a complaint against the transporter and the Blancafort slaughterhouse for animal abuse.