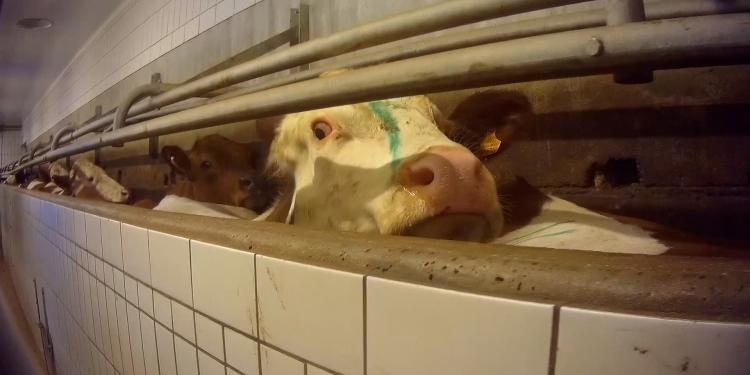 News
Today, L214 unveils a new investigation conducted in a French slaughterhouse of the Bigard Group (which owns the Bigard, Socopa and Charal brands), leader in bovine meat production in France and Europe.

Thomas Saïdi, an investigator from L214, applied for a position as a health officer within the official veterinary services of the slaughterhouse. These are the services that are supposed to control the respect of sanitary and animal protection rules. He was hired without any experience or qualification. Thomas filmed a part of the chain, from the arrival of the animals in the slaughterhouse to their killing and the first cuts.

He witnessed serious shortcomings of the veterinary services, numerous breaches of regulations leading to acute yet avoidable animal suffering.

In his testimony, Thomas shows:

L214 will file a complaint for serious abuse with a prosecutor as well as a liability claim against the French State for failure to fulfill its mission of controlling the application of the regulations.

L214 has also launched a petition asking the government to ban the killing of pregnant cows, at least during the last trimester of gestation. In this petition, L214 also asks :

In addition, this investigation proves once again the urgent need to make pre-cut stunning mandatory, to spare animals severe and prolonged suffering.

For Thomas Saïdi, investigator from L214:

The images I shot are harsh, but they are necessary at a time when it is forbidden to reveal what happens inside slaughterhouses without any logic of confidentiality, competition or security being at stake (...)”

For Sébastien Arsac, spokesperson for L214:

The Bigard Group does everything to make people forget the animals behind the meat. When you see the images from inside, you understand why! But the consumers who buy the group's products (the brands Charal, Bigard or Socopa) have the right to know (...) With the presidential elections just a few months away, this is a good time to open our eyes to the savagery of our society towards animals and to rethink the relationship we want to have with them."

Link to the video investigation