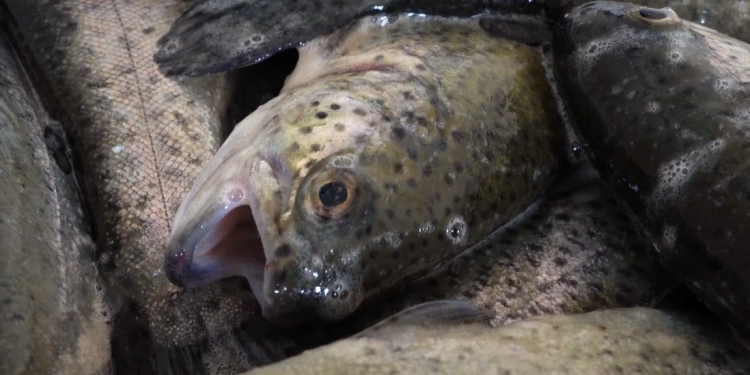 The Franz Weber Foundation has released footage from an investigation carried out between 2020 and 2022 in 12 Spanish fish farms. Using a hidden camera and drones, images were taken at fish farms of the most commonly produced fish species in Spain: sea bream, sea bass, trout and turbot.

Suffocating in ice for an hour and a half, pressed hard in the stomach to extract their eggs, bled to death while still conscious, or sucked out of water by an industrial pump.
This is the what thousands of fish on Spanish fish farms are exposed to every day.

Spain is the EU's second largest farmed fish producer and the EU's top aquaculture producer by volume, with over 175.5 million finfish bred in hatcheries in 2019.

The investigative footage shows slaughtering on ice, a widespread practice in most Spanish fish farms (and in other European and Mediterranean countries), which is undergone without prior stunning. It consists of immersing live fish in a mixture of ice and water, or in ice directly, which results in the slow death of the animals by hypothermia or asphyxia. When asked how long it takes for fish to die from ice slaughter, one of the workers at a trout farm in Granada replied that it takes an hour and a half.

The video also shows the overcrowding of fish in the tanks, premature deaths due to poor production conditions and inadequate handling of the fish by the fish farm staff. At one farm, a worker reported that 1,823 trout had died that day alone, and the previous day there had been 1,300 casualties.

Another practice shown in the investigative report is the process of forced spawning, where, every seven months, the animal is anaesthetised and its stomach is pressed hard to extract the eggs. The manager of one of the farms filmed explains that the spawning process can lead to injury or even death of the fish.