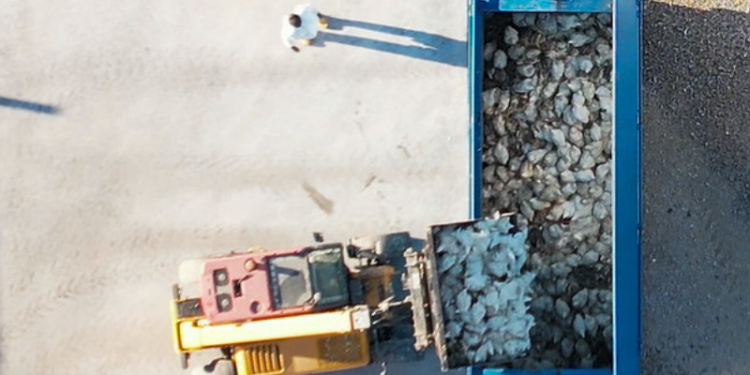 A new investigation by Essere Animali documents culling operations on a farm where cases of avian flu were detected. The film shows chickens being collected with the blade of a bulldozer and then herded by the thousands into containers which, once sealed, are filled with gas.

Since October last year, over 300 outbreaks of highly pathogenic avian flu (subtypes H5 and H5N1) have been recorded in domestic poultry, and several other cases have been found among wild animals in Italy. So far it is estimated that the number of animals slaughtered due to avian flu in Italy exceeds 15 million.

Essere Animali conducted an investigation in the most affected region, Veneto, which has the largest number of poultry farms and animals. Using a drone, they were able to capture footage from a farm in the province of Vicenza with a capacity of 300,000 animals where an outbreak of the flu was recorded.

As the video shows, the chickens are unloaded into containers at least two metres high, which are densely packed with animals. Inevitably, the chickens in the bottom layer are crushed by the weight of the chickens above. It takes about 30 minutes for the loading, covering, and gassing to be completed. The death of these animals is surely preceded by long minutes of fear and stress.

During this procedure, some chickens fall from the blade, risking physical injuries following the impact and further prolonging the agony of the animals.

We are disseminating these images because we believe it is necessary to reflect on our food system, which is based on excessive consumption and production of meat, made possible only by raising animals intensively. These farms are hotbeds for viruses, and as long as animals are raised by the thousands in confined spaces, avian flu outbreaks will continue to recur regularly with devastating effects. We are ignoring the cruelties inflicted on these animals and underestimating the potential risk to public health. Several experts have talked about the possibility that the virus could mutate and develop the ability to transmit among the human population.
Simone Montuschi, President of Essere Animali

Previous avian flu epidemics that have hit European farms demonstrate that it is not possible to limit an outbreak inside factory farms. It is precisely the conditions in which the animals live that cause viruses to spread rapidly and, if highly lethal like avian, kill most of these animals.

In addition to crowding — the average capacity of an intensive poultry farm in Italy is over 21,000 animals per complex — genetic factors also play a significant role: in farms, animals are selected to grow very quickly and produce enormous muscle mass, which in itself can cause physical problems. Moreover, they usually are genetically very similar to each other, so a virus can act undisturbed without encountering genetic variants that prevent its spread. To prevent epidemics from spreading, we need to review our food system based on the consumption of animal products.