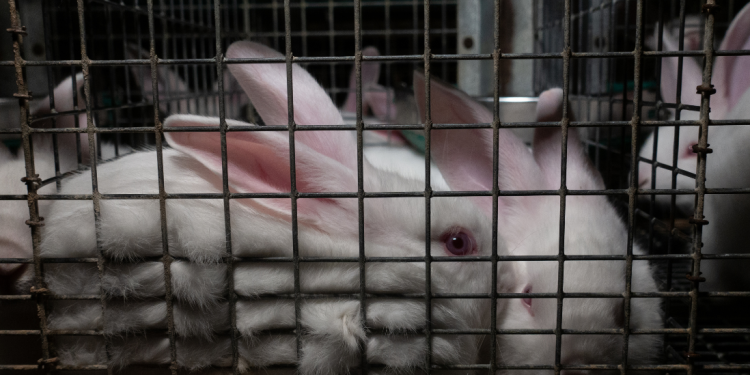 The Italian coalition in support of End the Cage Age - the European Citizens' Initiative (ECI) calling for an end to the caging of animals reared for food - released a new investigation today carried out in seven Italian rabbit farms. The coalition calls on the Italian government to urgently introduce a national ban on cage farming and support the EU Commission's commitment.

The footage was filmed between September 2021 and April 2022 by investigators from our member organisation Essere Animali, on farms located in Veneto (the region which accounts for over 40% of national rabbit production), Lombardy, and Emilia-Romagna, with the aim of giving a complete picture of the living conditions of rabbits reared for meat in Italy.

Italy is one of the largest producers of rabbit meat in Europe, with around 20 million rabbits reared in cages like those documented by Essere Animali. Breeding males spend about two years of their lives in these conditions before being sent to slaughter, females are discharged after one year, usually after giving birth to six litters, while puppies raised for meat are killed after 70-90 days, when they reach an average slaughter weight of 2.7 kg.

The animals are bred in sheds and confined in battery cages, inside which there are 2 or 3 adult rabbits or 6-7 young rabbits. The cages are made entirely of wire, including the flooring, and lack adequate environmental enrichments.

The footage shows:
- The presence of bodies of dead rabbits inside the cages;
- The presence of animals with injuries to their legs, caused by continuous rubbing against the wire, but also to their ears and head, due to the aggression that the animals express towards each other when they are forced to live in a high-density environment with few opportunities to move;
- The display of stereotypes - repetitive behaviour with no apparent function - such as making frequent movements in circles along the cage walls or repeatedly biting the wire.

The End the Cage Age coalition emphasises that these problems can be traced back to cage farming and the resulting lack of living space and positive environmental stimuli for the animals, as demonstrated by the scientific literature.

There is no law regulating minimum cage dimensions: adult rabbits have a space as big as an A4 sheet of paper. According to the European Food Safety Authority (EFSA), the biggest issue for farmed rabbits is movement restriction. A standard cage provides only 1% of the space needed by a group of rabbits that, under natural conditions, would cover an area of at least 50 square metres. Even in enriched, larger cages with a raised platform, the space available to each rabbit remains very limited.

In cages, rabbits cannot fulfil their needs and express their natural behaviour, or even stand upright on their hind legs. Furthermore, rabbits are prey animals, shy in nature, and the absence of shelters or hiding places creates additional stress.

On 30 June 2021, the European Commission pledged to phase out and permanently ban the use of cages on European farms through dedicated legislation – an extraordinary achievement made possible by 1.4 million people who signed the European Citizens' Initiative (ECI) End the Cage Age. Once presented, though, the legislative proposal will also have to be evaluated and approved by the Council of the European Union, composed of Member State ministers. Therefore, it is crucial that Italy unreservedly supports this transition.

In every farm visited, cases of injured, dead animals or animals with obvious behavioural problems were documented, and this is an unequivocal sign that cage rearing is not compatible with animal welfare. The Italian government is at a crossroads: in the coming months it will have to decide whether to endorse an anachronistic breeding system, which forces sentient beings to live in conditions of severe deprivation inside cages, subjecting them to physical and mental suffering, or whether to support the prohibition of this abominable practice and be a European bulwark of positive change in favour of increased protection of farmed animals.
Italian End the Cage Age coalition