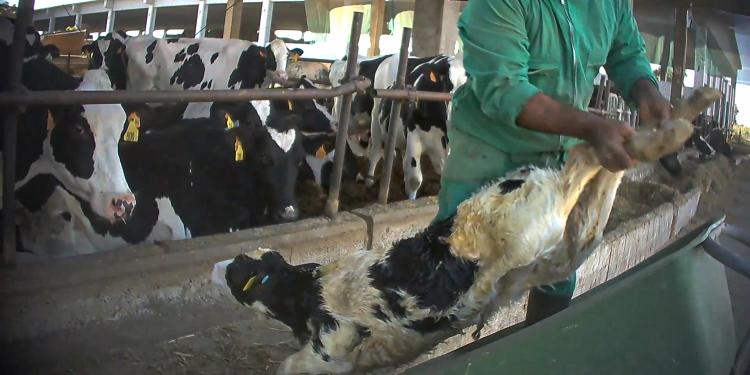 New investigation by Essere Animali on a dairy farm producing milk for Grana Padano. The footage documents the treatment of calves, separated from their mothers at birth, isolated in small pens and brutally treated by farm workers.

The organisation Essere Animali today released a new video investigation documenting the conditions of calves on a dairy farm located in Lombardy, in the province of Bergamo.

The farm under investigation is a producer of Grana Padano cheese, the most widely consumed P.D.O. cheese in the world, with the cheese plant located next to the barns which house 2,700 animals, including cows and bulls, as well as some 300 calves.

The investigation documents the first weeks of the calves' lives, from their birth to their confinement in small pens, casting a dark shadow over the conditions in which they are kept on dairy farms.
The undercover investigation released by Essere Animali shows:

For the production of milk, even that intended for products of “Italian excellence” such as Grana Padano, calves are raised in conditions of social deprivation and are subjected to stress and suffering. Change is possible, also in view of the growing number of European citizens demanding higher welfare standards for farm animals. For this reason, together with 77 NGOs all over the world, we are urging the European Commission to undertake a complete revision of the legislation on the protection of farm animals.
Simone Montuschi, President, Essere Animali

By disseminating this investigation, Essere Animali is relaunching the No Animal Left Behind campaign, coordinated by Eurogroup For Animals, an organisation that brings together 77 NGOs for animal protection in 27 EU Member States, the United Kingdom, Switzerland, Serbia, Norway, Australia and the United States.

The organisations are calling on the European Commission, committed with the Farm to Fork strategy to make the European food system fairer, healthier and more environmentally friendly, to revise the legislation on the protection of farm animals, which is currently considered seriously inadequate to guarantee them a life free from unnecessary suffering.

One of the demands made to the Commission is the application of farming conditions that would allow all farmed species to express their natural behaviours, including the intake of real food.

With regard to the conditions in which calves are reared, Essere Animali and Eurogroup for Animals are calling for a revision of EU animal welfare laws in order to:

This hard-hitting investigation provides a harsh wake-up call regarding the conditions in which calves are reared on dairy farms. However, we have a unique opportunity: by September, we can convince the European Commission to undertake a complete revision of the legislation on the protection of farm animals, and provide much better protection to calves and other species. It is incredible that the current legislation still permits the isolation and confinement of newly born animals: these are cruel and avoidable practices. We are asking for truly higher welfare standards which leave no animal behind.
Reineke Hameleers, CEO, Eurogroup for Animals

Notes
Link to the video
Photos, credit “Essere Animali”
Link to No Animal Left Behind campaign

Overview of the Grana Padano industry
Grana Padano is the most widely consumed PDO (Protected Designation of Origin) cheese in the world. The Grana Padano Protection Consortium is the body responsible for the functions of protection, promotion, enhancement, consumer information and general care of the interests relating to Grana Padano in its character as a PDO product.

129 producers, 153 seasoners and 160 packers and graters are geographically distributed in the regions of Lombardy, Veneto, Emilia-Romagna, Trentino-Alto Adige and Piedmont.

According to the Consortium's figures, 5,255,451 units were produced in 2020, with 41% of branded cheese exported and 59% consequently consumed in Italy.

Essere Animali is an italian animal rights organisation whose mission is to create a society where no animal is harmed and suffers. Essere Animali’s work focuses on food system and factory farming, both with individual outreach and promoting higher welfare laws and corporate policies.