New horror images in an intensive pig farm in France 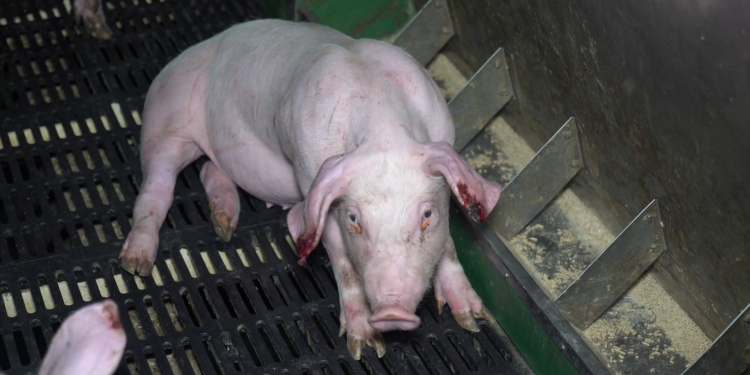 New horror images in an intensive pig farm in France

News
Our French member L214 reveals new shocking images shot in a pig farm located in Auvergne. This investigation aims to draw the attention of French MPs to the cruel reality of intensive breeding on the same day a public discussion on a proposed law on the animal condition is taking place in the French National Assembly.

The images, taken in mid-July 2020, were shot in an intensive farm in Barrais-Bussolles in the Allier region. The farm recently obtained permission from the prefecture to fatten 6,000 pigs. The livestock manager is also president of Cirhyo, one of France's largest pig cooperatives.

The shocking images show sick piglets, pigs who mutilate each other as a consequence of the high stocking density. Some piglets have significant skin problems (probably exudative epidermite, due to staphylococcus). Unable to protect himself, a pig is literally eaten alive. Several cans of sulfadiazine and trimethoprim are found on the shelves of the farm, such antibiotics are listed by the World Health Organization as essential medicines. Also bags of several kilograms of Amoxicillin and Doxycycline were found in the farm.

All pigs live on plastic or concrete slatted soil and will never have access to the outdoors in their short lives. L214 filed a complaint with the prosecutor of Cusset for mistreatment.

As Cédric Villani, the rapporteur of the EDS Group's draft law, told the Committee on Economic Affairs on October 1st: "Why would pigs have to mutilate themselves if it were not for the farming conditions? The conditions of breeding in a context of industrialization have led the animals to adopt behaviours such as self-harm. The pigs in these buildings are not put in a condition where they can meet their basic needs."