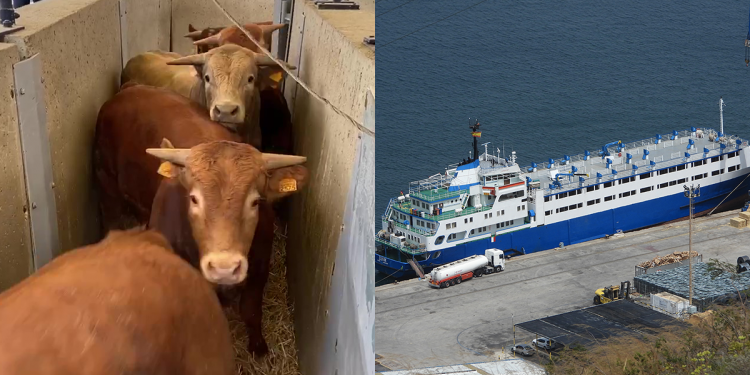 2,671 bovine who left Spain aboard two vessels might be still at sea after two months. They were refused at arrival in Libya due to bluetongue disease and their current situation is unclear.

The vessel Elbeik left Tarragona (Spain) last December and arrived in Tripoli (Libya) on January 10, 2021. As the 1,776 cattle were found to be affected by bluetongue disease, the animals were rejected. The Elbeik left the Libanese port with her full load 15 days after arrival. From that moment, the livestock vessel was spotted in Lampedusa (Italy), Alexandria  (Egypt) and Cyprus, where some animals were unloaded. According to anonymous information provided to our member organisation Animal Welfare Foundation, which is following the case, some animals are still on board and the vessel is running out of feed.

The same fate befell 895 bovines loaded at Cartagena (Spain) on the vessel Karim Allah: once arrived in Tripoli (Libya), the cattle were refused as suspected of being affected by bluetongue disease. After having been refused also by Tunisian ports, the full cargo reached Augusta (Italy). Here the animals, after having been on board for more than one month, were "partially unloaded". Currently the vessel is anchored off near Cagliari (Italy) and there is no clarity on how many animals remain on board.

The Animal Welfare Foundation (AWF|TSB) is constantly monitoring the situation and urging the Spanish authorities to intervene and save the animals. However, no action has been taken so far.

Despite the fact that Article 11.1(b) of Regulation 1/2005 requires competent authorities to grant authorisations to transporters only if they provide contingency plans in the event of emergencies, what happened to these over 2,000 bovines makes clear once more that contingency plans are not in place and that the EU Court of Justice ruling (C-424/13) on live export remains systematically disregarded.

Eurogroup for Animals joines Animal Welfare Foundation in urging the Spanish competent authorities to investigate these two cases and to find an immediate solution to ensure the welfare of the animals expected to be still on board the vessels, using the power conferred to them by Article 22.1 and 22.2 (Reg. 1/2005).

We also call on the European Commission to intervene in support of the Spanish authorities in solving any administrative and bureaucratic problems related to these two cases.