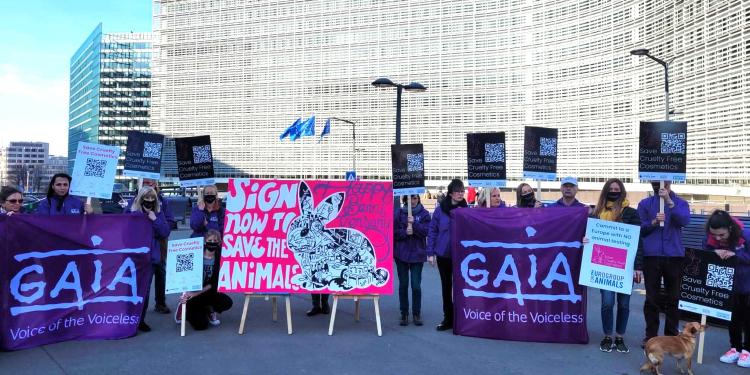 Press Release
The ECI Cruelty Free Cosmetics closed last night with a blast: 1.413.383 signatures collected in one year. Twice in less than a decade, over one million people across Europe have clearly said that animal testing must end.

Over ten million animals – cats, dogs, rabbits, mice and others – are harmed every year in research and testing in laboratories around Europe. Now European citizens are demanding an end to the harmful use of animals in cosmetics and other chemical tests, as well as an ambitious plan to bring all experiments on animals to an end.

The European Citizen’s Initiative (ECI) Save Cruelty Free Cosmetics closed on Wednesday 31st August with 1.413.383 signatures collected in one year. It’s an unprecedented milestone since this is the second ECI on this issue that has surpassed the one million signature mark, the first was Stop Vivisection in 2015.

This overwhelming support of EU citizens to end animal testing echoes the position taken last year by the European Parliament, which lead to a resolution calling on the European Commission to coordinate, together with Member States, a concrete plan to accelerate the transtion to non-animal testing.

Considering the health, environmental and political challenges that Europe and the world are currently facing, the huge public support sends a very clear signal to Europe’s lawmakers about the continued strong demands on this issue. We hope that this time the European Commission, and national governments, respect the positions of the public and the European Parliament and act now to put forward an ambitious and urgent plan to transition to an animal-free science, delivering better protection of humans, other animals, and the environment alike.
Reineke Hameleers, CEO, Eurogroup for Animals

The Save Cruelty Free Cosmetics ECI was launched in August 2021 by animal protection organisations Cruelty Free Europe, PETA, Eurogroup for Animals, the European Coalition to End Animal Experiments, and HSI/Europe with the support of global beauty and personal care companies The Body Shop and Dove, and was actively promoted by a coalition of groups and campaigners from every corner of Europe.

This mass mobilisation of citizens proves once again that there's no room for animal experiments in the EU. The ECI results and the EP Resolution set the way forward for Europe as the time is right for an ambitious phase-out plan, with clear milestones and achievable objectives.
Tilly Metz MEP (Greens/EFA, LU), Chairwoman of the Animals in Science Working Group of the Intergroup on the Welfare and Conservation of Animals

Our movement has once again raised the voices of citizens and of animals in laboratories, we are incredibly proud of this collaborative landmark and we look forward to a successful validation of the signatures.
Reineke Hameleers, CEO, Eurogroup for Animals

1. The End Animal Testing European Citizens’ Initiative (ECI) has brought together a network of NGOs across Europe. This is the first time in history that this number of European organisations has come together for animals in laboratories.

2. For more information on European Citizens’ Initiatives see the ECI Factsheet on the European Parliament website.

Eurogroup for Animals Travel Grant to attend the JRC Summer School on non-animal approaches in science
Major success in the USA: new drugs no longer have to be tested on animals for approval
Call for information on the targeted revision of Annexes III and IV of Directive 2010/63/EU