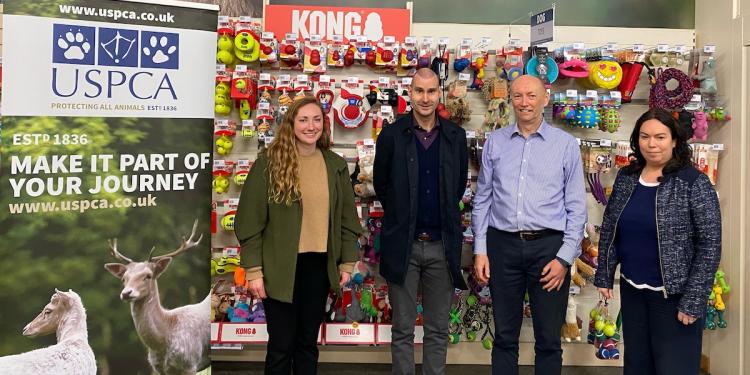 Last week colleagues from our political team went on a mission to Ireland to visit our Irish Members the DSPCA and the USPCA, and also met with the head of the Animal Welfare Unit in the Department of Agriculture Food and the Marine.

The main topic of conversation was centered around puppy farming and the trade of puppies between Ireland, Northern Ireland and Britain, as well as a focus on the Digital Services Act and how that can be used to help regulate this horrible business that is taking place across the European Union.

The USPCA recently published a comprehensive report on the puppy trade in Northern Ireland that highlights the shocking scale and ruthless nature of the region's puppy industry. We were grateful to have the opportunity to discuss this report with the USPCA and to use it as an example of how lucrative this business is and the urgent need for regulation when later speaking with the Department of Agriculture. The USPCA is doing fantastic work, rehoming thousands of animals a year, as well as rehabilitating wildlife. They have also redone their facilities and we were delighted to see such a bright and positive atmosphere.

We travelled down to Dublin and were welcomed by the DSPCA in the beautiful Dublin Mountains. The DSPCA are very proactive, instigating many investigations into the illegal puppy trade, as well as trying to change legislation to stop mutilation of dog ears and improve protection for equines at national level. The Sale and Supply of Pet Animals Regulation was recently implemented in Ireland thanks to the work of the DSPCA. This has already resulted in noticeable improvements in the Identification and Registration of legally sold Dogs and Cats.

With such a legally solid basis and excellent example, Ireland has the opportunity to be a champion Member State for the protection of companion animals across the EU. We sat down with the head of unit of the Animal Welfare division in the Department of Agriculture and were encouraged to see such positive engagement from them in relation to the Digital Services Act, and how it can act as a tool at European Union level. They also showed interest in an introduction of an EU-wide positive list for exotic pets and in a welfare reference center for fish. Ireland recently published an Animal Welfare Strategy 2021-2025, which has many positive ambitions starting with understanding animal welfare as part of the One Welfare concept, and a commitment to phasing out fur farming in Ireland.

Eurogroup for Animals are very pleased with Ireland’s efforts to improve the welfare of animals and look forward to seeing their support when it comes to the trade of pets online.