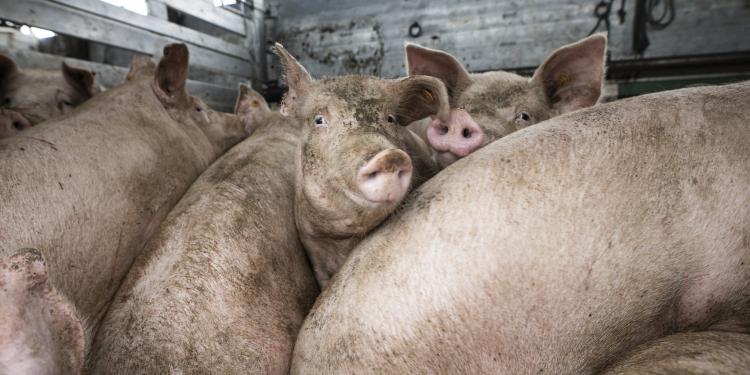 High temperatures and hundreds of animals crammed together on a truck without refrigeration are a horrible combination. Nevertheless, it happens to millions of Danish pigs every year.

The heat has taken over most of Europe, and it is creating major problems for the pigs loaded on trucks for live transport. Last week, the Danish Veterinary and Food Administration announced that it is currently refusing to pre-approve many animal transports planned over 8 hours due to the lack of consideration of the hot temperatures expected on the planned routes. Danish farmers otherwise export thousands of live animals daily on long animal transports, especially piglets destined to countries such as Poland, Germany and Italy for fattening.

“Long animal transports are already incredibly stressful and exhausting for the animals. Up to 900 piglets are stowed together in very little space and transported for up to 24 hours on the roads without any stops. If you add high temperatures and trucks that are not equipped with refrigeration systems, you run the risk of a real animal welfare disaster. I do not understand how year after year we still see an industry that tries to carry out transports to areas with very high temperatures knowing that they expose the animals to extreme suffering, "says Ditte Erichsen, veterinarian at Dyrenes Beskyttelse and trained in assessment of livestock welfare.

“About a third of the 15 million live pigs that Danish farmers export each year are transported for less than 8 hours, and they are therefore not in the same way subject to requirements such as that of a logbook that must be submitted to the Danish Veterinary and Food Administration over the expected route. I am therefore deeply concerned about animal welfare on Danish animal transports at the moment, ”says Ditte Erichsen.

European legislation allows pigs to be transported as long as the temperature inside the car does not exceed 35 degrees Celsius. According to Ditte Erichsen, however, it can be very difficult to control how the temperature develops during a trip carried throughout Europe.