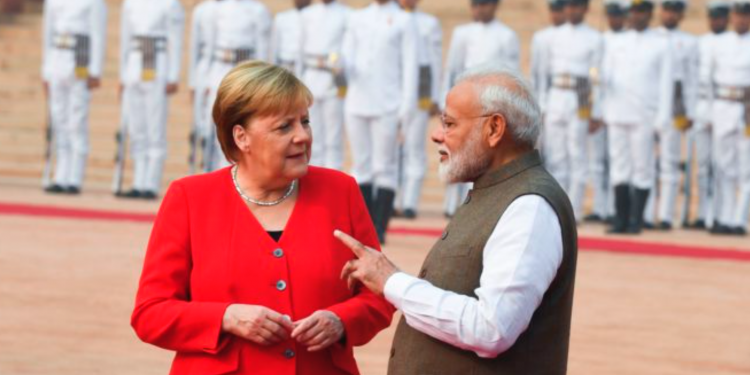 Merkel is in New Delhi for a fifth round of talks between the EU's biggest economy and the world's largest democracy under a cooperation platform, along with a delegation of ministers and business leaders. While the three-day trip is focused on building up bilateral trade ties, Merkel also faces calls to use her time with Prime Minister Narendra Modi to kickstart stalled talks on proposals for an EU-India free trade agreement.

Trade with India currently represents less than one percent of Germany’s foreign commerce, with machinery products making up much of its exports and textiles coming in the opposite direction. Despite a near 20 percent growth in trade value to upwards of €20 billion through 2018, there's room to improve, especially as Chinese economic growth slows amid a trade battle with the U.S.

"You can say that our economic relations have increased quite a bit, but they could be even more intense," Merkel said during a press conference with the Indian leader Friday.

Merkel earlier laid a wreath at a memorial to Mahatma Gandhi and said she would raise the issue of Kashmir — which has now been split into two provinces governed by New Delhi — with Modi directly. "Above all, we want India and Pakistan to find a peaceful solution," said Merkel. "I would like to hear the arguments of the prime minister today."

Mosa Meat cultivates beef without fetal bovine serum
EP Plenary: disappointing vote on live animal transport
Consumer poll shows: Over half of adults say they would like to try cultivated meat
Have you met SEY?